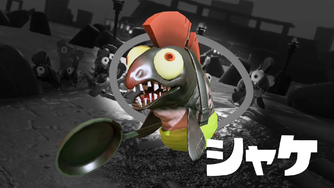 Chums are a type of Salmonid, the main antagonists of Salmon Run in Splatoon 2 and Splatoon 3.

Chums are the most common form of Salmonid, and use a frying pan to attack players. They are not very tough individually, but they can pose a threat in large numbers or against Inklings and Octolings that are not paying attention to their surroundings. During a Rush, Chums become very fast and deadly, and they come in huge numbers.

Chum is a type of meat that fishers use to attract sharks, and is also a species of salmon.