The Grizzco Slosher is a Salmon Run and Salmon Run Next Wave rare weapon in Splatoon 2 and Splatoon 3. It appears to be an illegally modified Sloshing Machine.

The weapon is an extremely slow slosher type weapon, with a long wind up time and very long range. More specifically, it is similar to the Dynamo Roller with respect to flick speed, range, and ink consumption .The projectiles from this weapon are very similar to those of the Sloshing Machine, albeit much larger, with a significantly slower travel speed, and the projectile will not arc, instead traveling straight fowards and falling at a 90° angle down at its max range. The defining factor that sets the Grizzco Slosher apart is its unique ability to pierce through anything, comparable to the Sting Ray and the Explosher. The Grizzco Slosher can hit targets directly and continue to travel through them. This piercing ability also allows the weapon to attack through Scrapper's and Drizzler's armor, Steel Eel's and Griller's ink walls, as well as do direct damage to Flyfish and Steelheads. The weapon has a very high ink consumption, only allowing for a maximum of 4 shots with a full tank. It does the most damage out of any main weapon. It can only fire four shots, but you only need three to splat any boss. The best example of this is the Flyfish, which can be one-hit splatted with this weapon.

The Grizzco Slosher is somewhat similar in appearance to the Sloshing Machine. However, the paint job on the Grizzco Slosher seems to have been removed, revealing the metal beneath. The Grizzco Slosher has four mismatched metal tubes sticking out from the sides, a white Grizzco logo on the side, and some extra tubes and wires in the back. 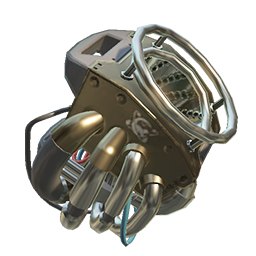 The Grizzco Slosher is a rare weapon only available during Salmon Run wildcard rotations. It was first available on 17 June 2018 at 00:00 UTC

The Grizzco Slosher was available during the following Wildcard rotations:

The weapon is a Slosher (namely, a Sloshing Machine) that was modified by Grizzco.