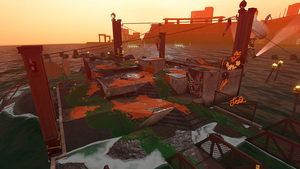 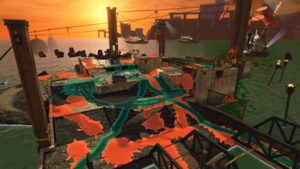 Spawning Grounds is a Salmon Run and Salmon Run Next Wave exclusive online multiplayer stage in Splatoon 2 and Splatoon 3.

Spawning Grounds features a wide variety of terrain on each corner of the map. The following directions apply when standing on the sloped platform adjacent to the egg basket, facing towards the slope which descends in this view. A multilayered slope leading to three small piers are located just behind the basket. To the right is a grated walkway overlooking the lower grounds. To the left are slopes down to a small sandbar. During low tide, the sandbar expands exponentially revealing three protruding landmasses.

Reaching to certain ranks during a Spawning Grounds rotation in Splatoon 3 will reward the player with special badges that they can use on their Splashtag.