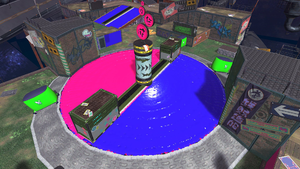 Fancy Spew is a multiplayer stage in Splatoon 2. It was the fifth variation of Shifty Station, and first appeared in the Inner Wear vs. Outer Wear, Film vs. Book, and Sweater vs. Sock Splatfests. It returned in the Chaos vs. Order Splatfest. As of version 5.0.0, it is exclusively available in Private Battles. The stage features Spreaders, most notably the rotating spreaders in the center.

Players spawn on either end of the stage, on raised platforms that lead down to a central area. Each side has uninkable ramp near spawn and spinning spreader with their ink color. At the right side of each spawn point, there is an area to ink and an uninkable spinning Spreader on the wall that leads to a bigger platform. At the left side of each spawn point, there are long paths that lead to the center where there is a platform with a wall and a box on the left. At the center, there is a large spinning spreader with each team's colors that can be climbed on that stops spinning at the fifteen seconds left mark.

Fancy Spew is named after the Nancy Drew books written by many people under the pseudonym of Carolyn Keene. The name refers to the Spreaders, which "spew" ink onto the stage.