Windmill House on the Pearlie

Splatoon 2​
Windmill House on the Pearlie 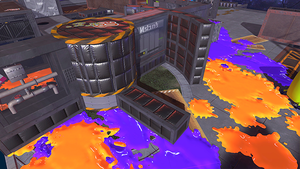 Windmill House on the Pearlie is a multiplayer stage in Splatoon 2. It was the fourth variation of Shifty Station, and first appeared in the Vampire vs. Werewolf, Dexterity vs. Endurance, and Warm Breakfast vs. Cold Breakfast Splatfests. It returned in My Melody vs. Pompompurin and Chaos vs. Order. As of version 5.0.0, it is exclusively available in Private Battles. It features four rotating walls placed around the stage.

Players spawn on either end of the stage, on raised platforms that lead down to a central area. Each side has a rotating platform where the walls can be covered to climb on it and not fall to the abyss. At the center, there is a big wall and two uncoverable rotating platforms, and only can be crossed to the other side by going through the rotating platforms. This original version of the map is no longer available for play.

When this stage was reused during the Sanrio Splatfest tournament, the central revolving doors were skewed with the left one (per player point of view) moved closer to the spawn. The middle has also been opened up, allowing free movement from one side to the other. The right side of the spawn point has also been expanded.

Windmill House on the Pearlie is named after Little House on the Prairie, a novel by Laura Ingalls Wilder. Additionally, it references the four rotating platforms, or "windmills," as well as Marina's nickname for Pearl, "Pearlie".