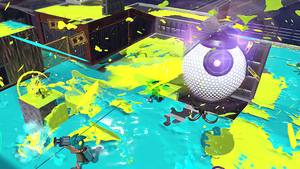 Grapplink Girl is a multiplayer stage in Splatoon 2. It was the ninth variation of Shifty Station, and first appeared in the Newest vs. Most Popular, Baseball vs. Soccer, and Salty vs. Sweet Splatfests. It returned in the Chaos vs. Order Splatfest. As of version 5.0.0, it is exclusively available in Private Battles. The stage features an element of verticality, with Grapplinks allowing for fast travel to higher areas.

This layout contains many obstacles and ramps, making walking around the floor very difficult and providing limited visibility. Above many of the raised platforms, there are floating Grapplinks, which allow players to quickly travel along the higher areas. The central area is a high, narrow bridge over a gap, that can only be scaled via a ramp from each team's left flank, a wall on each side near the middle, or using the Grapplinks. It stands between two canyons that separate it from the team base areas. Throwing a bomb or Point Sensor or using the Sting Ray links the player to the Grapplink. Sting Rays run out immediately once teleported there.

Blocking the right flank of each team's canyon, right before the center area, is a tower with a triangular roof, that seems to be taken from Camp Triggerfish.

Grapplink Girl is named after the Gossip Girl books by Cecily von Ziegesar, as well as being a pun on the Grapplinks seen in the stage.