Skipper Pavilion is a stage in Splatoon 2 added in Version 4.1.0.[1] It is set in a Japanese-styled pavilion. Unlike most stages, it features lateral symmetry.

Unlike most other stages in the Splatoon series that feature rotational symmetry, Skipper Pavilion's stage layout is laterally symmetrical. The spawn point is at the top of the stage, at adjacent corners. Directly in front of the spawn point is a ramp that leads down to a platform which has access to a raised platform with a large statue and gratings. Downwards from the main spawn platform is another platform with a ramp facing away from the center which leads to a raised platform. At the spawn point, on the side furthest from the center, is a walkway that drops off to the previously mentioned raised platform. From the middle platform is another layer, with a ramp leading to a small area and another ramp leading to the main area. The bottom of the center area is large and relatively flat, save for a slightly raised section at the very end. The center has a pathway going up from the far end of the stage, which leads up to the temple, which is large and flat with a pillar in the center.

Skipper Pavilion is an Asian-style pavilion off a coast, housing a temple theater that is under construction. The stage is supported by beams, which raises it above water, though players need to be careful as they are still able to fall and dissolve. The spawn point is surrounded with Shōji, or rice paper walls. The very bottom of the stage has a Kansho garden, with stone paths, small trees and raked gravel. Near the garden are two iron statues of mudskippers with blue accents that parody real-life Komainus. On the edges of the stages are ema boards, which normally have visitors write down wishes and leave the notes on them. On the sides are glass rooms serving as spas and practice ranges, occupied with jellyfish. The spas are decorated with plants and have vending machines, and the practice ranges have mats, targets, and blinds, and is surrounded with shimenawa. The theater houses mats, cushions and display cases, and is supported by pillars covered with tarps. Above is a sign written in Inkling and the platform is surrounded by short wooden guardrails. In the front are two large stone statues, one of an Inkling squid and one of an Octoling octopus, whose bases are covered for construction. Above are two large paper lanterns. All around the stage are construction panels, crates, barriers, grating and tarps which are used as obstacles or platforms the players can use to access more of the stage. The walls in the center are either glass displays and construction tarp, which are uninkable, or wooden boards, which are inkable. In the distance are rock islands with trees, observation boardwalks and a temple surrounded by trees. In the far distance is a city, presumably Inkopolis.

The zone is located in the rock garden on the far side of the stage furthest from both teams' spawn points. An Inkrail is added in front of spawn to get to the middle area quicker. Several blocks have been added or rearranged in the lower section of the stage, but the overall layout is relatively unchanged.

The layout of the stage is relatively the same. However, a large series of uninkable platforms have been added over the large gaps in the lower area. This area allows access to the upper portions of each team's spawn point. The Tower is located on the far side of the stage, on the wooden pavilion in the lowest area. From that point, the Tower moves beside the lower ramp, up one level. After crossing the area, it ascends straight up to the next level, then the goal is at the far side of that platform.

The Rainmaker is located at the far end the stage, as far away from each team's spawn point as possible, on the wooden stage. The goal is located at the edge of the same level as each team's spawn point. Ramps have been added between each level to facilitate moving upwards. A slightly protruding path has also been added, leading up to the highest level. An entirely new section of uninkable bridges has also been added over the gaps in the lower section of the stage to allow more routes of entry. Routes to the goal are very limited on Skipper Pavilion. 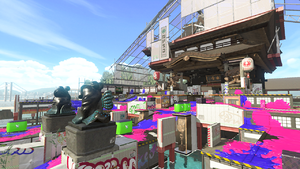 Skipper Pavilion was the final regular stage to be added to Splatoon 2. It was announced on 20 September 2018 and was made available on 3 October 2018 as part of Version 4.1.0.