Saltspray Rig is a multiplayer stage in Splatoon.

Saltspray Rig is an ocean-based oil rig, with pipes, crates, and suspended platforms resting over a large body of water. 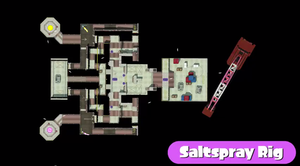 Unlike most other stages in the Splatoon series that feature rotational symmetry, Saltspray Rig's stage layout is laterally symmetrical, with the exception of the obstacles in the top area. Saltspray Rig is shaped like a squid, with two spawn points leading into a series of pathways and drop-offs. The spawn point area is not accessible to the enemy team, except in Rainmaker mode. There are two elevators located in the middle of the map to quickly move from the bottom area to the top area. Pathways stemming from each spawn point cannot be accessed by the other team, and branch off into smaller trails that lead to the top area and bottom area.

The top area is located opposite from the teams' spawn points. It is normally the last area to be claimed due to its distance from the spawn points. It features a tall structure in the middle which is heavily contested in the later parts of the game to claim the surrounding turf. There is also a moving platform that a player can use to claim turf quickly, but in turn, exposes the player, as the player will fall through the platform if they turn into a squid.

The bottom area is located between the team's spawn points. It is often the first area that is claimed but is typically forgotten towards the end of the game, due to the battle shifting towards the top area. In the last minute, it is easily claimable. The starting areas in Saltspray Rig cannot be reached on foot by the opposing team, so there is a lot of turf that can be easily claimed during the game. A team with a charger, splatling,

Inkzooka, though, may be able to claim some turf if the opposing team is not paying attention. Both areas contain paths leading to the bottom area and top area. If a team is not careful, the opposing team may launch an Inkstrike in the area near the end of a battle, claiming some turf which the players cannot claim after leaving their starting area. The only way a player can get back up their team's starting area is to Super Jump to their team's respective spawn or one of their teammates, or a

Squid Beakon. There is abyss surrounding the stage as a hazard for players who fall in. 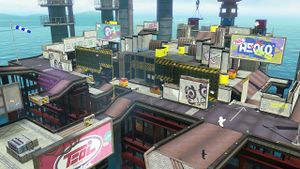 The Splat Zone for Saltspray Rig sits just below the top area, just inside the "entrance" and before the ramp. It can be easily taken by players shooting ink on ledges on the opposing sides, but if the front of the zone is not protected, the opposing team can easily take control of the zone.

The Tower starts at the bottom of the T-shaped section just before the top area. When taken, the Tower briefly travels around the T and down the pathway towards the enemy base before turning and going down the side of the map. It then begins traveling on the lower pathways that lead to the bottom area. Each team's goal zone is directly below the exit opposite from the bottom area when going there. Boxes have been added so that players can easily attack the other team if they have taken the Tower or vice versa. This means that the action on this stage is condensed to a small area, making the top and bottom areas go almost completely unused.

The Rainmaker starts on the middle platform that the elevators rise to. Platforms containing the Rainmaker goal pedestals are built next to the spawn point. Walls have been added so that a team can reach their opponents' base. Walls block off the far side alley, forcing players to leave the spawn area through more direct routes. 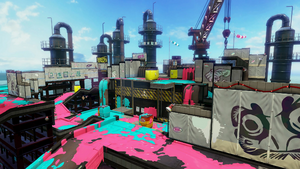 Saltspray Rig underwent a series of changes between its development period and release.

Saltspray Rig was released with launch of Splatoon.

Saltspray Rig was available in the following Splatfests in Splatoon:

Saltspray Rig is derived from the nouns 'saltspray' and 'rig'. Saltspray is salt that comes from the ocean waves, and a rig is a structure housing equipment used to drill or extract oil from underground.

シオノメ油田 Shionome Yuden is derived from 'Shionome' (the point where two ocean currents meet)' and 'oil field', an area deep underground in the ocean for oil to be drilled or extracted.