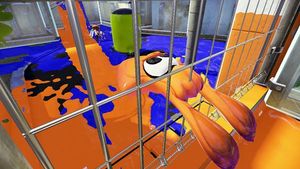 An Inkling going through a grate on Urchin Underpass.

A grate, or mesh, is a terrain feature in the Splatoon series.

Grates are ink-resistant metal bars that can be laid both vertically or horizontally. Inklings and Octolings can pass through them in swim form, though while in humanoid form, they can walk on them without passing through. Ink can also be shot through them.

In multiplayer modes, grates are used as a natural territory barrier so players must transform into a squid or octopus to pass. Grates can also be used to ambush enemy players who are not expecting an attack from above them. In single-player modes, grates should be explored as they often lead to hidden areas with Sunken Scrolls or additional Power Eggs. 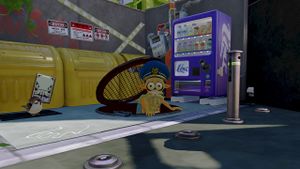 Cap'n Cuttlefish looking out of the grated manhole in Inkopolis Plaza.