Bluefin Depot is a multiplayer stage in Splatoon. It is an abandoned coal mine with railway track above it. A river splits the stage down the middle, with the spawn areas connecting the left and right paths.

Bluefin Depot is an abandoned coal mine consisting of four different levels, the two uppermost most of which can only be accessed by the enemy team by grated walkways. The lowest level is divided by a body of water and requires traversing the third level to switch parts. The lowest level of Bluefin Depot is where most of the fighting between the two teams takes place. It consists of two platforms that are separated from each other by a small body of water that cannot be jumped over. The level just above the lowest level of Bluefin Depot is where all traveling between both sides of the level below is made. Chargers cannot snipe too much from here, mainly because of the iron bridge running over the middle of the stage. Each team's base is comprised of a top level and a bottom level. The top level is where players respawn; it can only be reached via a grated walkway in the middle. The bottom level is where players can get to the different sides of the depot and can only be reached by a grated walkway on the opposing team's right.

The Splat Zone in Bluefin Depot can be found on the side that is closest to the ocean. Two ramps leading towards the Splat Zone are located on the other side of the stage. Walls have also been added on both sides of the stage to help each team attack the other, and for mobility. Blocks have also been added to the bottom level of the bases prevent sniping from each base and to the lower level to even the ramp located on each side.

In Tower Control, the Tower starts in the center, above the water and can be accessed by an added bridge. Once claimed, it moves to the right and up the walls. Then, it crosses over to the left side and continues up until it reaches the goal. Inkable blocks are added to the uninkable block on the left of the spawn point to make base invading easier.

In Rainmaker, the weapon is located in the middle of the stage. The control points are directly in front of the spawn points on each side. In this mode, there have been a few changes to the map, most notably the middle where the weapon is located. There are pathways, as well as a platform where the Rainmaker sits and ramps where players can get on each side of the stage with ease. A box and grated walkway leading up to this section are added on the left. 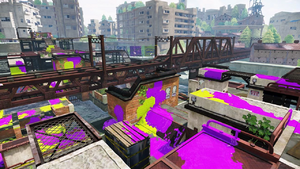 Bluefin Depot was available in the following Splatfests in Splatoon: