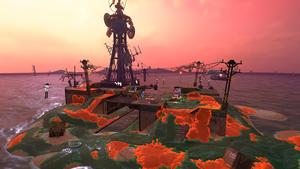 Salmonid Smokeyard is a Salmon Run exclusive online multiplayer stage in Splatoon 2. It was made available at The Shoal with the release of Version 2.0.0 on 24 November 2017.

Salmonid Smokeyard is a small island with two lone structures. Ramps on each structure will lead down to the sandbar while propeller platforms connect the tops of both structures. In the crevice between the two structures is a long rectangular pool of water. Salmonids can spawn from this pool, but only during fog.

During high tide, it is not possible to walk from one structure to the other, and the propeller platforms are the only way of reaching the other side.

During low tide, a large dock will reveal itself to the side of the island.