From Inkipedia, the Splatoon wiki
Jump to navigation Jump to search
Splatoon 2​
Flooders in the Attic 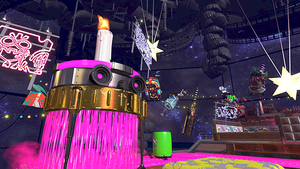 Flooders in the Attic is a multiplayer stage in Splatoon 2. It was the eighteenth variation of Shifty Station, and first appeared in the Fam vs. Friend Splatfest. It returned in the Chaos vs. Order Splatfest. As of version 5.0.0, it is exclusively available in Private Battles. Flooders are the main feature of this stage, surveying small areas on both sides of the stage. Bounce Pads can be used to ride on top of the Flooders.