Walleye Warehouse is a multiplayer stage in Splatoon and Splatoon 2.

Walleye Warehouse is a close-quarters stage, featuring a plethora of obstacles such as crates, boxes, and conveyor belts.

The spawn area is a narrow hallway with a single slope leading down. In front of the spawn point is a moderately open area with multiple paths leading away and a large crate for last-ditch defenses. The only way on to this level is through a large tarp ramp, forcing players to walk up in their vulnerable humanoid forms. The spawn point area is accessible to the enemy team. The right path from the spawn point and the right opening of the middle floor form a long route to the side areas of the center arena. The left path winds around the outer side of the map into the opposite side area, with grates extending out from occasional openings in the walls.

Going from the middle floor to the main floor is a simple drop, but the most direct opposite path is using another tarp-covered ramp. Beside the ramp is a crate that can only be jumped on to from the top floor and is a great long-range harassment perch. The center is a large square with a U-shaped stack of boxes in the middle, fully inkable. On either side are the side areas, similar to the main area in shape and size, with some boxes of their own at their center, as well as a large wall for cover. There is an abyss on each base area the player can fall to by sliding and jumping through the fences. 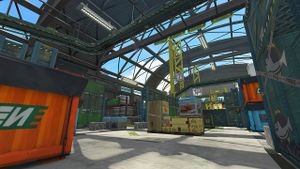 The Splat Zone in this map is located on the central battlefield, with half on one side and a half on the other. The stacked crates are at the center of the zone. To gain control of the zone, a team has to take control of both sides and defend the opposing side from enemy ink to keep the zone.

The Tower is located in the middle of the map, up high the platform. The Tower goes straight forward and to the finish, which is in front of the rival spawn point.

In Splatoon 2, checkpoints were added:

The Rainmaker in Walleye Warehouse starts in the center of the U-shaped crates. The goal is located directly right from the bottom of the ramp at the opposing team's base. The blocks from the Splat Zones and Tower Control maps for Walleye Warehouse are still in their same spots, as well as some new blocks added for cover from the Rainmaker's ink tornadoes, and for the person holding the Rainmaker to quickly get up the ink resistant ramps.

The basket and the bump near it are located in the lower surface near the un-inkable ramps. There are three passageways for the basket: through the center, through the left narrow path, or down the right side by climbing the block. 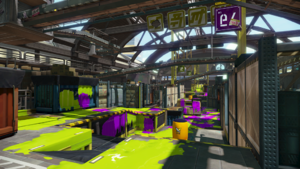 Walleye Warehouse underwent a series of changes between its development period and release.

Walleye Warehouse was released with the launch of Splatoon.

Walleye Warehouse was available in the following Splatfests in Splatoon: 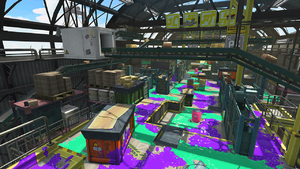 Walleye Warehouse was released on 15 December 2017. Aside from the addition of a few small boxes in the center of the stage, Walleye Warehouse remains unchanged when compared to its Splatoon counterpart.

Walleye Warehouse is derived from the nouns 'walleye' and 'warehouse'. A walleye is a fish with eyes pointed outward as if looking at the walls, hence the name. A warehouse is a commercial building for storage of goods, often used by manufacturers, importers, exporters, wholesalers, transport businesses, customs, etc. They contain containers, crates, boxes, and conveyor belts.

ハコフグ倉庫 hakofugu sōko is derived from 'boxfish' and 'warehouse'. A boxfish is a squared, bony fish.