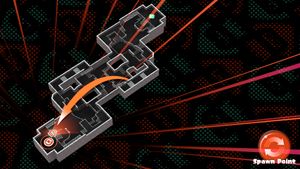 of a player Super Jumping back to the spawn point.

Super Jumping is an ability that Inklings and Octolings have that allows them to jump very high in the air in order to land somewhere else. Super Jumps are performed in various contexts, such as moving between areas or jumping to a teammate in multiplayer matches.

When an Inkling or Octoling begins to Super Jump, they crouch down in squid or octopus form, pointing upwards (and in the case of an octopus, with their tentacles curled outwards) and start charging up the jump. During this time, they cannot move and are vulnerable to enemy fire, although it is possible to change the startup duration with abilities. Players using the Baller, Sting Ray, Ultra Stamp, Bubble Blower, Tenta Missiles, or holding the Ink Storm cannot Super Jump.

When the player jumps, they do so quite high into the air towards their destination. This arc is too high for enemy fire to reach, but either way, the player is completely invulnerable during a Super Jump. The time it takes from the start of the jump to landing is always the same regardless of distance, but can also be changed with abilities. Where they will land is marked by a marker, meaning enemies can wait there to splat that player. This can be hidden by using the ability Stealth Jump. Once the player lands, they are able to move once more, though it is possible to use weapons before landing. Sub weapons cannot be used, however; although the player can pull them out and reveal the trajectory marker, they can not throw it until they land.

While Super Jumping, the player can go through walls and floors to ensure that the jump is successful.

Inklings and Octolings may also begin charging a Super Jump while falling, however, they will not begin the jump itself until they touch the ground, to ensure that they do not Super Jump to avoid falling off of the map. An Inkling or Octoling can also Super Jump while swimming on a wall, in which they stop in place to charge, then jump as normal. This can be used to escape enemies who may not think to look at the wall in time. Although Inklings and Octolings will normally fall through grating if they turn into a squid or octopus, they will not do so when initiating a super jump.

A circular marker appears on the landing spot which is visible to everybody, unless the visibility is altered by Stealth Jump. This marker has the player's name written on it and an arrow above it pointing down. The arrow has a meter built in that resembles ink in a tank. The closer the player is to landing, the less "ink" is shown in the arrow. Players can use this to gauge how close their opponent is, meaning they can release an attack at the exact moment of landing, or toss a bomb with careful timing so that it will explode at the moment of landing.

In multiplayer modes, the player can use their map to Super Jump from their current position to a few specific spots, namely the spawn point, a teammate or a Squid Beakon or Big Bubbler. In Splatoon, this can be done by tapping the respective object on the

screen (Squid Beakons do not have buttons). In Splatoon 2 and Splatoon 3, the player can Super Jump by selecting the icon corresponding to the desired target on their map with or by tilting the controller. can be used to quickly select a teammate or the spawn point while the map is open. Teammates can only be selected if they are alive.

In Splatoon, Squid Beakons are immediately destroyed when Super Jumped to. In future games, Beakons can be used up to twice, displaying their number of remaining uses on the map with the pips on top. Once both pips are used, the Beakon is destroyed. If a player with Squid Beakons as their sub weapon Super Jumps to a Beakon, it is destroyed regardless of how many pips it had. A Big Bubbler can be jumped to any number of times before the special ends.

The destination can slightly change during a jump in order to accommodate for moving terrain. For instance, jumping to a Beakon or teammate riding on a Tower makes the jumper follow the Tower during the trip and always land on it, instead of where it used to be when the jump started.

When jumping to a teammate, the game considers the final landing position to be the last bit of ground the player stood on. Therefore, if a player Super Jumps to a teammate that is swimming on a wall, they instead land on the last part of the ground that the teammate walked on. If the player last stood on the Tower, the landing destination naturally also follows it, meaning that if a player walks on the Tower, then hides in a wall and stays there, their last grounded position will always be the Tower, allowing teammates to jump to the Tower at will.[1]

It is impossible to Super Jump with a Rainmaker in hand, but it is possible to Super Jump with most special weapons activated, including the Kraken and the Bomb Launcher. Jumping to a player that is in the middle of a Super Jump makes the destination match the other player's destination. Technically, a Super Jump only begins when the icon or button is released, not when it is pressed. It is also common that when Super Jumping in Splatoon 2, the player activates the Splashdown in midair, causing the special to occur when landing, splatting any opponents near the landing spot.

Teammates that are picked to be jumped to receive a notification on their screen with the jumper's name inside an arrow-shaped symbol. Every time the jumping player taps the teammate, the symbol flashes. Because players can tap a teammate while in the respawning animation (which does not allow for a jump), a screen notification does not mean that the player is jumping, but rather that their character got tapped by said player.

A player that gets a notification can use it to assist their oncoming ally by defending the landing position. If the jump has not started yet (which can be distinguished by the notification's sound and a lack of landing marker), the player may also head to safety, to ensure a safer landing for the teammate.

Quick Super Jump can be used to reduce the time it takes before the player jumps off, and the time the jump itself takes. This ability can be stacked, and is sometimes used to combat Stealth Jump's speed cut.

Sub Power Up, in conjunction with Squid Beakons, reduces the time it takes for any player to Super Jump to Beakons placed by the player using the ability. This can also be stacked.

Drop Roller lets the player do a small dodge roll after landing from a Super Jump, which includes immediately after using an Inkjet or Zipcaster and when jumping to a Squid Beakon. This ability is exclusive to shoes.

In the single-player modes, Super Jumps take less time to start, likely because there is no enemy element that forces the player to Super Jump strategically like there is in multiplayer. In the hub world of Octo Valley and Octo Canyon, the player can select any level's icon in order to Super Jump to its kettle.

Inside a level, Super Jumping can only be performed by turning into a squid or octopus on a launchpad, which takes the player to a pre-determined point further ahead in the level. Enemy Octolings can also Super Jump; they start off in an unknown location and land on pre-determined spots to ambush the player. In Octo Valley, these Octolings do not appear to have a visible landing marker, but they do in Splatoon 2.

The player's character also automatically Super Jumps away from most Octarian bosses after destroying the large tentacle that appears in each of its battle cycles.

In the Battle Dojo, grabbing a Mystery Canned Special has one of its random effects cause both players to switch places by Super Jumping.

In Salmon Run, there are scripted Super Jumps at the start of each wave to an affixed starting point, affecting all players. It is not possible to view the map and jump to a teammate in this mode. After clearing wave three, all players are seen Super Jumping back to a boat with a large antenna.

In Super Smash Bros. Ultimate, Super Jump is Inkling's up special move. Using it makes the Inkling leap into the air before falling back down in a helpless state. During the move, the player can slightly control the angle of the Super Jump. It also deals damage and applies ink to any nearby opponents when initially leaping as well as landing.