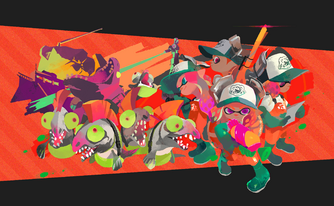 During wildcard rotations, one of Mr. Grizz's weapons can be accidentally added to the mix.[3] These rare weapons are tweaked versions of normal weapons with much more powerful stats and cannot be accessed when playing Salmon Run at The Shoal or any other Mode.

There are six possible titles in Salmon Run, with Profreshional having four additional ranks depending on the player's point range, introduced in Version 2.3.0.

Every 100 Grizzco Points (200 after reaching 1200 points in a rotation) earns the player one bonus "capsule", which comes in different colors representing the type of the contents, or a piece of gear. The gear is selected from a list of items available only through Salmon Run and was initially rotated every calendar month. The main ability of this item is randomly determined when the bonus is redeemed. It usually has three blank slots for secondary gear abilities, but there is a random chance that the secondary gear ability slots may come already filled. The pink capsule can contain any Grizzco gear that has been released. If the player receives gear they already have, they can either replace the old gear with the new version or receive cash (if the new gear has no slots filled) or ability chunks (equal to the filled slots) instead.

Bonus capsules can contain cash, meal or drink Crust Bucket Tickets, ability chunks, or Grizzco gear. As of Version 3.2.0 of Splatoon 2, after exiting Grizzco Industries players will spawn just outside rather than returning to the center of Inkopolis Plaza, making it faster to claim their bonuses from the window.