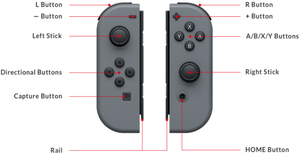 A pair of Joy-Con labelled.

Joy-Con are the main controllers for the Nintendo Switch and one of two types that can be used in Splatoon 2. They use Bluetooth LE technology and have a battery life of over twenty hours of continuous gameplay. They also feature finer haptic feedback called HD Rumble instead of traditional vibration technology and replaced the traditional on the Joy-Con (L) with a four-button array identical to the cluster, for more comfortable controls and the same single-controller experience as with the Joy-Con (R).

A Joy-Con (L) and Joy-Con (R) pair, two straps and a grip are included with every Nintendo Switch, with extras and individual controllers sold separately. Minus and , they are exactly as tall as the console itself to create a continuous rounded rectangle shape when they are attached to it.

The Joy-Con (L) has eleven buttons, including a directional four-button array that replaces , the clickable , the shoulder button, the trigger, the Capture button, and , , and SYNC, which doubles as a power/reset button.

The Joy-Con (R) also has eleven buttons, including the diamond, the clickable , the shoulder button, the trigger, , and , , and SYNC.

The Joy-Con Grip compared to the Joy-Con Charging Grip.

The Joy-Con Grip is an accessory included with every Nintendo Switch. The player can slot the Joy-Con into either side of it to form a more conventional controller. However, it does not add any other features or establish any communications with the console or controllers. The Joy-Con Charging Grip is a separate accessory that charges the controllers while using it, if connected to the Nintendo Switch, and has a translucent plastic backing rather than the matte opaque plastic used in the regular grip.

Soon after the ARMS Direct, Nintendo announced new Splatoon 2 themed Joy-Con colors, in neon green and neon pink, along with other Splatoon 2-themed accessories including a Nintendo Switch Pro Controller. They are sold separately in Japan, as a pair in Japan and Europe, or in a bundle with a Nintendo Switch, Splatoon 2 and a Splatoon 2-themed carrying case in Japan and America. They were released on 28 July 2017, a week after the release of Splatoon 2. Neon green and neon pink Joy-Con straps were also offered exclusively in Japan.

On 5 January 2018,[1] Joy-Con with the swapped color scheme were announced, available by choosing them in the custom Nintendo Switch configurator in Japan or sold as a pair in America. 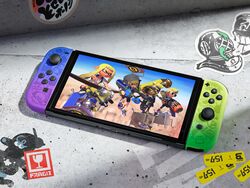 On 6 July 2022, a Splatoon 3 version of the Nintendo Switch - OLED Model was announced, due for release on 26 August 2022. It includes themed Joy-Con, designed for the first time with color gradients: blue and purple on the left and yellow and green on the right, both with graffiti designs, and a white tentacle pattern on the rear.