The Inkbrush is a main weapon in the Splatoon series.

As a roller-class weapon (brush-class in Splatoon 3), the Inkbrush can be pushed along the ground while leaving a trail of ink. Much like the Splat Roller, the Inkbrush can be used as a melee weapon that splatters ink in front of the player. Of all weapons in its class, the Inkbrush travels at the highest speed and leaves the narrowest trail. The high rolling speed can be used to quickly escape or approach an enemy. It has the lowest damage output in its class; four flicks (or five bumps while rolling) are needed to splat an opponent. The Inkbrush consumes 2% of the ink tank capacity per flick, allowing the player to fling 50 times before needing to refill the tank.

The Inkbrush is most comparable to the Octobrush, another paintbrush-like weapon. The Inkbrush is faster and more ink efficient while having less range and dealing less damage per glob of ink.

The Inkbrush was released on 5 June 2015. It comes with Sprinklers and the Inkstrike.

When using the Inkbrush, the player's Inkling holds the weapon on the right-hand side of its body. Usually, this does not affect the gameplay, but if a player makes a sharp left turn while in enemy ink, they get stuck in the ink.

When flicking the Inkbrush, there is a random chance that more than one glob of ink hits the opponent. 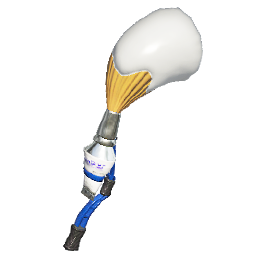 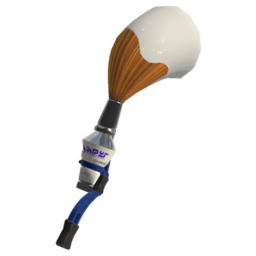 The Inkbrush returns in Splatoon 3. It comes with Splat Bombs and the Killer Wail 5.1. It was originally shown in a New Year 2022 teaser on Twitter,[5] looking similar to how it does in the previous games, with the difference being that its bristles are darker, resembling the Permanent Inkbrush's bristles, but more saturated.

It appears in 3 missions in Alterna:

Reaching certain Freshness levels with the Inkbrush will reward the player with special badges that they can use on their Splashtag.

For competitive tips about the Inkbrush

The Inkbrush appears as Inkling's forward smash attack in Super Smash Bros. Ultimate, alongside a variety of other weapons that she uses in her attacks.

When attacking, she charges up and swings the Inkbrush forwards to deal damage. This also coats opponents in ink but does not ink the ground. It deals much lower damage if Inkling is out of ink.