The Dapple Dualies are a main weapon in Splatoon 2 and Splatoon 3.

The Dapple Dualies deal enough damage to splat opponents in three hits, unlike the Splat Dualies and Dualie Squelchers which need to land four hits to splat an enemy. In the post-roll state, the weapon's firing rate is 20% faster than normal, and its accuracy is improved as well.

The Dapple Dualies are built on two main parts, both of which are a berry red color and connected to each other via a black handle. The bottom part of each dualie houses a white and light blue toothbrush, while the top part houses the nozzle, a black pole at the top, and a small metal stick. The upper section looks as if it was build lightweight, for the max mobility. The toothbrush is held in place via a small wire, possibly representing dental floss, that holds it to the stick. 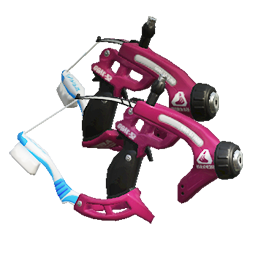 The Dapple Dualies come with Squid Beakons and Suction-Bomb Launcher.

It appears in one Octo Expansion station: 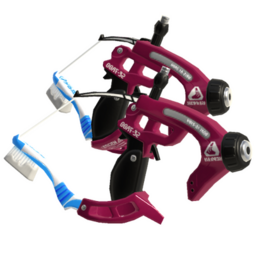 The Dapple Dualies return in Splatoon 3 with Squid Beakons and the Tacticooler, looking exactly identical to how they did in the previous game.

They appear in two missions in Alterna:

Reaching certain Freshness levels with the Dapple Dualies will reward the player with special badges that they can use on their Splashtag.

For competitive tips about the Dapple Dualies