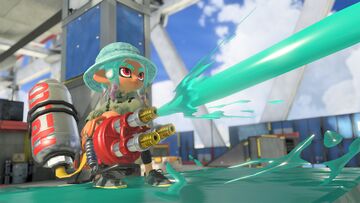 A promotional image for Splatoon 3 featuring an Octoling wielding the Hydra Splatling, a weapon included in the Splatling class.

Splatlings are one of the main weapon classifications in the Splatoon series. These gatling gun or rotary cannon-style weapons are somewhat similar to chargers in that they must charge for a short time to increase effectiveness. However, unlike chargers, all splatlings have two levels of charge. The first level increases the range and firing duration, while the second level is faster to charge and increases the firing duration even further but has no effect on range. While their stats do vary, they all have a high fire rate (equal to the Aerosprays), low damage (equal to that of the Splattershot Jr.), and impressive range. Additionally, the Nautilus has the ability to store a charge similarly to most chargers.

The first weapon in this class, the Heavy Splatling, was released in Version 2.0.0 of Splatoon.

The long range and high rate of fire make splatlings great at turfing and providing support fire from a distance. They turf more quickly compared to other long-range weapons, such as chargers, Dynamo Roller and the Jet Squelcher. This makes them a popular weapon of choice for backline anchor players.

The Splatling is a portmanteau of 'splat' and 'gatling'.