The Killer Wail is a special weapon in Splatoon.

While the normal Killer Wail never appeared in Splatoon series sequels, variants with new or improved functionality have appeared. In Splatoon 2, a Killer Wail like weapon called the Princess Cannon appears. In Splatoon 3, the Killer Wail 5.1, which consists of six small Killer Wails, is available as a special weapon in online battles.

The Killer Wail appears to be a giant gray megaphone attached to a similarly colored body. The megaphone itself is fairly standard aside from its large size. It is mainly dark gray with an even darker gray rim, and there is a warning label on the inside of the mouth of the horn speaker. The megaphone is attached to a dark gray box with a protruding cylinder on its left and its right. The ends of the cylinders change color to match the user's ink, and the end of the left cylinder has a sticker bearing the Custom logo on it. Behind the cylinders are four mufflers, two on the right side and two on the left. The two that are on the top face towards the user, while the two on the bottom face away from the user. All four of the mufflers are a purple-gray color with blue and pink stripes at the top. Behind the mufflers are two black handles that resemble the handles on a bicycle with hand brakes. The user's Inkling uses the handles to aim the Killer Wail. When the Killer Wail is fired, there is a brief period where a series of circles that change color to match the user's ink shoot out of it. Once the Killer Wail begins to fire, large sound waves that change color to match the user's ink begin to ripple out of it, and the mufflers begin spewing ink.

When activated, the Killer Wail projects a series of concentric circles in its intended path for a moment before firing massive shockwaves in the user's ink color shortly after. They splat any enemies they touch, ignoring buildings or other obstacles. While the Killer Wail does not spread any ink of its own unless an opponent is splatted, it is useful for gaining or keeping control of the stage.

Weapons with Killer Wail in Splatoon 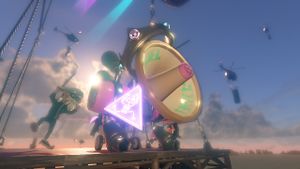 Princess Cannon in the Octo Expansion.

In Splatoon 2, as explained in Sunken Scroll 11, no special weapons from the first game return. The role of the Killer Wail was indirectly replaced by the Sting Ray, in that they both shoot an extremely long beam that can pass through walls.

During the final boss Turf War in the Octo Expansion, after the player has successfully completed the objective, Pearl uses a customized Killer Wail known as the Princess Cannon together with her battle cry to defeat the final boss.

After its appearance in the Octo Expansion, the Princess Cannon returned during the Chaos vs. Order Splatfest as a special weapon that could be obtained and then used by any player at the center of MC.Princess Diaries one minute before the end of battle.

The Inkling fighter in this game uses the Killer Wail as their Final Smash. Upon activation the Killer Wail charges for a brief moment and then fires a powerful beam that paints enemies in the players color. While the beam is firing the player is able to attack and move freely and can angle the beam up and down by moving .

"Killer Wail" is derived from "killer whale" and "wail", the latter of which references its method of splatting opponents.