Turf War (Octo Expansion)
Ink to save the world! Defend Inkopolis from the ultimate doom!​

Turf War (Octo Expansion)
Ink to save the world! Defend Inkopolis from the ultimate doom! Turf War is the final boss of the Octo Expansion.

The player has three minutes to shoot the hyperbombs Marina drops onto the NILS Statue and stop Commander Tartar from destroying Inkopolis. The hyperbombs are added to different locations on the statue and first appear after a certain amount of time has passed. These are as follows:

Due to the statue's sheer size, the map of the stage is displayed on the screen during the battle as opposed to being viewed when pressing

and rotates around depending on where the player is, compared to the usual maps that have a fixed view. Hyperbomb locations are marked on the map as they are dropped and can be seen through walls, and a tally of the hyperbombs that have been activated is listed so the player can keep track of how many are left.

If the player gets splatted or fails to detonate all of the hyperbombs in time, an image of Inkopolis getting destroyed by the laser is shown. Then, the option to skip the final boss battle becomes instantly available, filling the Skip Charge to 100%, where the following dialogue will be displayed if the player skips:

"Agent 8 covered the massive weaponized statue in ink...". This does not prevent the player from getting the Octo Shot Replica, playable Octolings or the Inner Agent 3 fight.

The dialogue after reaching the surface:

During the battle introduction:

The quotes that are spoken during gameplay:

The dialogue after returning to the helicopter:

The dialogue after reaching the surface:

(Marina: Now we can heave a sigh of relief again!)

(Pearl: It is an adventure until we arrive at our destination!)

(Cap'n Cuttlefish: Time to inspect the heli! Maybe I can teach you something yet!)

(Marina: Hey! Are you completely out of your mind?!)

(Cap'n Cuttlefish: You have to do your best to impress!)

(Marina: Jeez, Pearl! That is a secret!)

(Cap'n Cuttlefish: That form... But they were already eradicated long ago, right? It is a...)

(Tartar: I am Tartar, a form of artificial intelligence, developed by the professor...)

(Tartar: You walking seafood have made a lot of progress...)

(Tartar: You have acquired almost as much knowledge as the old civilization.)

(Tartar: Your useless battles for territory got completely out of hand!)

(Tartar: It is because of your arrogance. Everyone only thinks about themselves...)

(Tartar: You laboratory rabbits... were the seeds which a perfect world had to come forth from...)

(Tartar: But you turned out to be an especially huge disappointment! Come, NILS!)

(Tartar: Everything has to be ground to get the world of the humans back!)

(Marina: Wait a second... I am busy with an analysis.)

(Marina: Good crab legs, I measure a gigantic quantity of energy in that statue!)

(Marina: The NILS statue absorbs sunlight and converts that into energy.)

(Marina: So if we cover it with ink, it can no longer charge energy...)

(Pearl: What? We have to cover that whole stony thingamajig? Are you serious?)

(Marina: I have something for that: hyperbombs! Although the prototypes do not explode by themselves yet.)

(Marina: Agent 8... You have to come close to NELS to hit the bombs and to make them explode.)

(Marina: If NILS is weakened, you have to inflict the final blow with your megaphone.)

(Pearl: Huh? Are you serious? I have not done that for centuries. I don't know if I can still do it!)

(Marina: I estimate that we have 3 minutes before NELS destroys the whole world.)

(Marina: Use those 3 minutes to warm up. Just jump around a bit!)

(Pearl: Understood... I would want to sacrifice my vocal chords to save the world. )

(Marina: O, yes... come up with something for encouragement, so that we can get started.)

(Cap'n Cuttlefish: Do your best, because you have a lot to do! From now on applies: go for it, Squidbeak!)

(Marina: Agent 8! Use the ink rails and Grapplinks to get to a different place!)

(Marina: I throw hyperbombs at these points!)

(Marina: Make all these hyperbombs explode within 3 minutes!)

The quotes that are spoken during gameplay:

(Marina: Here are the first hyperbombs! 5 on his chest!)

(Cap'n Cuttlefish: Come on! Shoot! Paint it up!)

(Tartar: Bzzzt... Make you ready to get destroyed, stupid seafood!)

(Marina: Perfect! Now his neck is next! Wait a second...)

(Marina: 30 seconds! 5 hyperbombs around the neck!)

(Tartar: BZZZT! You will be pulverized and mixed into cement for the new world!)

(Tartar: B-B-Zzzt... The world gets destroyed and the dream of the professor gets fulfilled!)

(Marina: Good job! Now only the head! Give me a little moment...)

(Marina: Two minutes! This is the last load of bombs! 10 on the head!)

(Tartar: B-Bzzzt... The time has come, NILS! The world has to be destroyed!)

(Marina: 30 seconds left before it unleashes enough energy to destroy the whole world!)

(Pearl: There is still only one hyperbomb left!)

The dialogue after returning to the helicopter:

(Marina: The statue is not fully charged, but it looks like it is going to shoot!)

(Tartar: ...but now you still get a little place in the perfect world of the professor!)

(Tartar: Professor... Our reunion is forthcoming...)

(Cap'n Cuttlefish: Hang in there until we're ready!)

(Marina: Well... because I invented them?)

(Marina: DJ Hyperfresh with the bombs that explode! I bring so much that they never run out!) 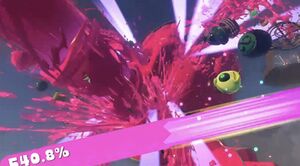 Various objects coming from the destruction of NILS