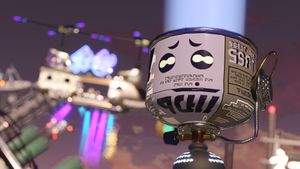 The hyperbomb is a special type of bomb invented by Marina that appears in the Octo Expansion and the stage MC.Princess Diaries in Splatoon 2.

Hyperbombs are large ink bombs that resemble Suction Bombs with a relatively shorter canister. On their sides are stylized depictions of Marina's face, consisting of two black dots with white infinity symbol shapes that resemble her eyes, two black crescents situated above the dots that resemble her eyebrows, another black dot to the bottom right that resembles her beauty mark, and a small device on the side connected to the canister by a tube that resembles the visible part of her headphones. Marina was working on creating them during the events of the Octo Expansion.

Hyperbombs were first seen during the final Turf War battle against Commander Tartar in the Octo Expansion. They are used as a key weapon to defeat the final boss.

Marina utilizes Off the Hook's fleet of helicopters to drop them onto the NILS Statue in order to stop it from absorbing enough sunlight to power up its laser by using the bombs to cover it in ink during the three minutes it has left to charge. However, she notes that "they're still prototypes", so Agent 8 is forced to traverse around the statue and manually detonate all of them by hitting them with their Octo Shot and/or Splat Bombs within the time limit of three minutes.

During the final battle, the NILS Statue is marked in advance with Marina's octopus symbols, marking the locations where the thirty hyperbombs will land, allowing the player to plan their attacks. The symbols are colored to match the color of hyperbomb that will drop there. During the the intro to the battle, Marina explains where and when the hyperbombs will drop as the camera pans around the statue, displaying all of the markers. Hyperbombs are dropped on the statue in the following order: at the start, five light-blue ones on its chest; at thirty seconds, five green ones on its neck; at one minute, five yellow ones on its back; at one and a half minutes, five purple ones on its right arm; and at two minutes, ten dark-blue ones on its head. Once they have landed, the hyperbombs are visible through walls and each emit a beam of light, allowing them to be spotted easily. The 3D map on the top-left of the screen also marks the hyperbombs' locations and how many hyperbombs of each of the five colors have been detonated.

While the first two groups of hyperbombs are easily accessible, later groups require the use of ride rails and Grapplinks. All thirty bombs must be detonated within the time limit for the player to succeed. Even if the player detonates all of them within the time limit, they will still fail if they get splatted prior to the end of the battle by falling into the water that surrounds the statue.

Hyperbombs make their only multiplayer appearance on MC.Princess Diaries, the final Shifty Station used for the Chaos vs. Order Splatfest, which also features appearances from Off the Hook and the Princess Cannon. Three groups of hyperbombs appear on the stage, being dropped by Off the Hook's helicopter at the 2:45, 1:30 and 0:15 marks; like in the Octo Expansion, there are markers that denote in advance where the hyperbombs will fall. These hyperbombs are slightly larger than normal, take significantly more damage to detonate, and are colored in each team's ink color. Players can only detonate the other team's bombs. Unlike in the Octo Expansion, they do not appear on the map.

In localized versions of the speech played while the player is waiting for the time to run out at the end of the Turf War, it is revealed that hyperbombs are named after Marina's online username, DJ_Hyperfresh. In the Japanese version of the speech, Marina changes the name to "Elegant, Dramatic, and Amazing" bomb, calling it "E-DA" bomb for short, after her Japanese online username, DJ E-DA.