The Tenta Camo Brella is a main weapon in Splatoon 2. It is a Sheldon's Picks-branded version of the Tenta Brella and comes with a different sub weapon and special weapon. 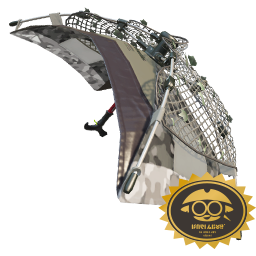 The Tenta Camo Brella shares its build with the Tenta Brella. There are Camo paintings in the sheilding view and the Players view. However, the parts of the Tenta Camo's canopy that change color to match the user's ink have a camouflage pattern, and the other parts of the canopy are gray. The Sorella logo and warning labels are black, and the bars now match the player's ink. There is mesh with leaves in it strung around the bars.