It also retains the white barrel of the Kensa Charger, differing in the reservoir color (where the Splatterscope and Firefin Splatterscope have a different barrel colors from their non-scoped versions). 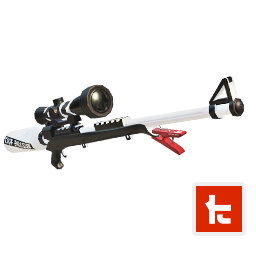 The Kensa Splatterscope was released on 14 September 2018 at 02:00 UTC. It comes with Sprinkler and Baller.