The Hero Slosher Replica is a main weapon in Splatoon 2.

The Slosher is a bucket of ink that can be swung to splatter turf and enemies in a straight line. The trajectory of the ink can be adjusted to strike enemies behind walls or on above high surfaces. It's strong enough to splat opponents in only two shots.

The Slosher deals constant damage no matter how far away the ink travels, unlike rollers and shooters which deal less damage as ink travels farther due to fall-off damage. However, there is still fall-off damage when targeting opponents below the player, dealing less than maximum damage.

In addition to this, more ink will be spread the farther away the ink travels, allowing for an easier time to get around and move in the ink. 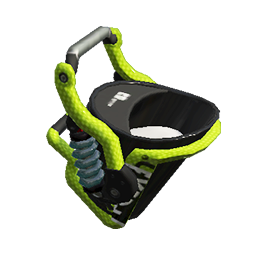 For competitive tips about the Hero Slosher Replica

Note: the strategy advice for Slosher also applies to Hero Slosher Replica, so they share the same strategy page.