The Nautilus 47 is a main weapon in Splatoon 2 and Splatoon 3. It is a splatling-type weapon that can store its charge.

The Nautilus 47 has three short barrels sticking out of a metal head piece. They are connected to a short metal body piece using three black tubes with stripes that change color to match the user's ink. The body piece also houses a handhold. The main part of the Nautilus 47 is a round metal shell bearing the Ammo Knights logo, which protects its inner workings. On the side of the shell that faces the user's body is a tight metal coil that disappears into the body piece, as well as a light pink block that stops up the entrance to the body piece. The block is slightly visible from the side facing away from the user's body, and it seems to have a handle sticking out of it that changes color to match the user's ink. Going across the block on the handle side is an oddly bent reddish-brown tube that goes into the body piece. 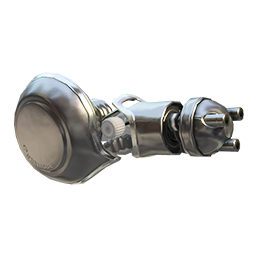 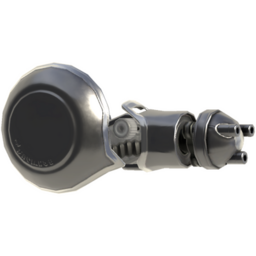 The Nautilus 47 returns in Splatoon 3 with Point Sensor and Ink Storm as its kit.

It appears in 3 missions in Alterna:

Reaching certain Freshness levels with the Nautilus 47 will reward the player with special badges that they can use on their Splashtag.

Nautilus refers to weapon's resemblance to the shell of a mollusc of the same name and 47 is the atomic number of silver, referring the weapon's silver coloration.