The Zipcaster is an upcoming special weapon in Splatoon 3.

Activating the Zipcaster coats the user in team-colored ink. It also gives the user a "helmet" resembling their squid or octopus form and a "scarf" resembling their tentacle, both of which depend on the user's species. The user can also stretch their arms while in this form. 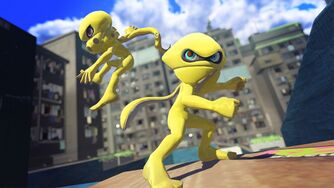 The Zipcaster transforms the user into a form with long, stretchy arms. While in this form, the user is able to grab onto far off walls and travel quickly to the targeted spot, creating a small explosion upon arrival. When the ink runs out, the user will travel back where the special was activated, ending the special. Like the Inkjet, the return spot is visible to all players.

It appears to be part of the Splash-o-matic's and the Octobrush's set.