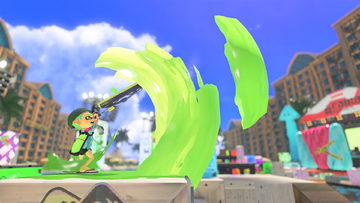 A promotional image for Splatoon 3 featuring a Inkling wielding the Splatana Wiper, a weapon included in the Splatana class.

Splatanas are one of the main weapon types in Splatoon 3.

Splatanas are sword-like weapons that send blades of ink flying with each swing of the weapon, which is done by pressing the button. Swings after holding the button would become a charged slash. Regular slashes fire a horizontal projectile, while charged slashes use a vertical one.

The Splatana class was first announced in the Splatoon 3 Direct.

Splatana is a portmanteau of "splat" and "katana".