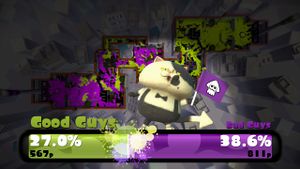 Judd determining the winner of a Turf War based on each team's total Battle Points.

Battle Points, usually shortened to BP, Points, or simply p, act as experience awarded to players after completing a multiplayer match. These contribute towards the player's Level and are also the determining factor in the winner of Turf War battles.

Use of Battle Points

Points are primarily used to level up players and unlock abilities. Points are also converted into cash and can be used to purchase gear such as clothes, shoes, and headgear, or buy weapons. Battle Points are counted at the end of every Turf War match to decide a winner and are also used to fill the Special Gauge.

Players can earn points in Turf War, Splat Zones, Tower Control, Rainmaker and Clam Blitz. In all these modes, Battle Points are used to fill the Special Gauge, which allows players to use their special weapon. 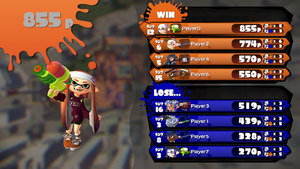 The results screen after a Turf War, ranking players by amount of Battle Points earned.

In Turf War, points are earned by covering ground with ink. Each stage has a set number of total Battle Points, based on the amount of land available for inking. However, players may easily earn more points than this amount because ink is often recovered by the opposing team. In a given match of Turf War, the team with the most turf covered after three minutes wins. Points are awarded based on the amount of turf covered by individual players, and as a bonus, 1000 points are awarded to each player on the winning team, or 300 before final Splatfest.

Battle Points are based on the team's score, which is how much the team moved their counter for each mode's objective. The counter goes down by holding the control of the Zones in Splat Zones, riding the Tower in Tower Control, moving the Rainmaker close to the opponent's podium in Rainmaker and tossing clams inside the opponent's basket in Clam Blitz. The players earn five Battle Points per score point, where the winning team gets a win bonus depending on the player's rank and whether they scored a knockout.