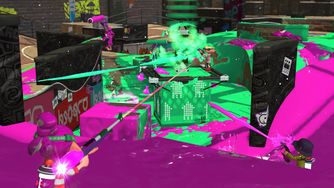 Tower Control is one of the four Ranked Battle modes in the Splatoon series, alongside Splat Zones, Rainmaker, and Clam Blitz.

The tower is a large blue cube with a stake on top, and a grate that creates an overhang surrounding the entire top surface. Its walls and ground can be inked, but the post and the grate can not. The height of the tower also varies depending on the map - it can be short, medium, or tall.

In Tower Control, two teams of four players fight to control a central tower that moves through the stage along a predetermined path. The path is mirrored and goes towards each side of the team's territory. The tower starts at the center, and when a player rides on top of it, it begins moving towards the enemy territory. If an enemy player is standing on the tower while the player rides it, the tower is contested and it stops moving. If the player standing on the tower falls off the platform or gets splatted, after an enemy player stands on the tower or five seconds have passed, the tower begins moving rapidly back to its initial position. Because of this gameplay element, the player on the tower is a constant target and must be defended by teammates on the ground. The match ends when one team rides the tower all the way to the opponent's finish mark, or after five minutes are up and overtime is done, the team who pushed the furthest wins. Overtime in this mode begins if the current losing team has control of the tower when the five minutes are up and finishes once that team loses control of the tower or takes the lead. A draw cannot happen and the game degrades a point for the team who reached second to the score.

In Splatoon, the more players are riding, the faster it goes. The changes in speed are as follows:[2]

Clips of Tower Control from Splatoon 2.

Tower Control received a few tweaks in Splatoon 2. Checkpoints have been added along the path the tower takes. When the tower reaches a checkpoint, it stops for a set period of time before continuing on as normal.[3] Once a checkpoint is cleared, the tower can pass through it again without stopping. If the tower reached a checkpoint and was interrupted, whether by enemy team interaction or five seconds have passed since the team left the tower, after three seconds of lost control, the checkpoint's timer refills. If the pushing team gained control back, the three seconds are reset and the checkpoint continues to be cleared.

In contrast to Splatoon, the tower no longer gains a general speed boost from having multiple players ride it. Instead, the number of players only affects the speed at which checkpoints are cleared.

Tower Control appears as two of the tests in the Octo Expansion: Rad Ride Station at Snapper Canal and Sweet Ride Station at Starfish Mainstage. Both tests require Agent 8 to ride the tower past six checkpoints and against multiple Sanitized Octolings. At the last checkpoint, a Sanitized Octoling Super Jumps onto the tower with a Splashdown and throw a Splash Wall down to try to get Agent 8 off the tower. Agent 8 has unlimited lives and can only fail the test if five minutes run out.

Unlike multiplayer, a Launchpad appears near the player's spawn point, which Super Jumps Agent 8 directly onto the tower. If Agent 8 is splatted, only one Sanitized Octoling takes the tower.

In the Octo Expansion, the logo on the side of the tower is replaced by the Kamabo Corporation logo.

To help identify the tower's current position, a pillar made of rings of light shines from its position into the sky. Players can look up and around in order to locate the tower. The two goal spots and checkpoints have glowing lights from them.

While the tower is moving, its path is shown around the stage, letting players know where it will go. The path lightly glows with the ink of the team that is currently in possession and the glow follows the path that the tower is taking.

When not on the tower, the anchor Ranked Battle icon, seen throughout the stage is pointing towards the position of the tower. On the map, that icon is always visible. The path, goal, and checkpoints are not visible on the map.

The score is measured by how far into enemy territory a team has ridden the tower.

If a team manages to get the tower to the enemy goal spot, then that team wins the match and achieves a Knockout score. The other team gets no points.

Overtime begins if the losing team (with a shorter distance traveled[a]) currently has control of the Tower. At this point, Overtime ends when:

Being ridden by team Alpha:

Being ridden by team Bravo:

Being ridden in Octo Expansion (a rendition of Completion):