Starfish Mainstage is a multiplayer stage in Splatoon 2. It is based on a concert stage with a set of higher platforms surrounding it.

Starfish Mainstage overview prior to Version 2.1.0.

The stage contains a concert stage located at the center with mosh pits in front and behind it. The main focal point is the raised concert stage at the center of the map which is fairly open, barring a few blocks for coverage. The mainstage has tall inkable vantage points located on each team's right which towers above the center stage. Narrow paths or grates and jumpable gaps line the outer wall of the stage, which allows flanking. The spawn points are located at opposing ends on two levels of raised platforms, dropping from here gives access to three paths, right and up to a high ground over the right side of the map, left down a corridor giving access to the left, or straight down into a lowest plaza straight into accessible area. A large block only inkable from the player's team's side is located in front of spawn, to give a not easily accessible vantage point for the team.

The Splat Zone is located at the very center of the map on top of the stage. The left side of spawn has been extended to make for a vantage point and make it easier to control the zone from far. Other than that, the map has been unchanged.

The Tower is located at the center of the map's center stage. The Tower travels forward, then towards the right down the ramp, moves forward a bit then progresses to the left in front of the structures, then travels forward and to the right again into the opponents' mosh pit then goes forward towards the goal. Inkrails have been added to get into the action quicker. The sponge has been removed, and a new ramp has been added to the right, as well as a second inkable structure and the removal of the glass structure present near the taller, inkable one. To the right of spawn, there are less walls, the blocks are uninkable, and there is a grate on the left. To the left of spawn, the grates have been extended to provide a bigger vantage point.

The Rainmaker is located at the center of the mainstage. The goal is located on the layer right above the lower plaza by each team's base. Inkrails have been added to get to the action quicker. A ramp has been added in the plaza to make it accessible. The same ramp towards the right, second tall structure, and removal of the glass structure from Tower Control are present in this mode. To the right of spawn, there is a little bit of extra turf and grates have been added to provide more space for each team. The left of spawn looks the same as Splat Zones.

The baskets are located in the low plazas by each team's base. Inkrails have been added to get to the action quicker. While the glass structure is still present, the objects on it have been adjusted slightly to make it more accessible. To the right of spawn, a glass wall has been added to prevent the enemy team from accessing your spawn. The inkable block has been shortened, and tiny walls have been added to the side of the shortened block. The left of the map looks the same in Splat Zones and Rainmaker, and the sponge has been removed. 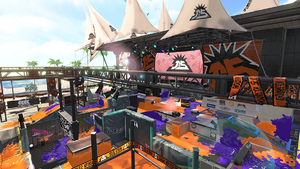 Starfish Mainstage was released with launch of Splatoon 2.

In this version, the area toward each team's base was significantly smaller, the lowest point of the map was only confined to a small portion with two lower paths interrupted by the block on each side. The path to each team's right compacted the area much more and had more walls. The area in front of the Spawn Point inaccessible by the opposing team was also much smaller, Near the middle to the right, there was a sponge.

On 29 August 2018, the official Splatoon Tumblr announced that Starfish Mainstage would be undergoing maintenance on 1 September 2018, getting a similar treatment as Urchin Underpass did in Splatoon. They released an image showing the original map scribbled on, allowing fans to see what about the stage would be changed. Many features were altered, including:

On 14 September 2018, Starfish Mainstage returned after it had been closed for reconstruction.

Sweet Ride Station, a mission in the Octo Expansion.

In the Octo Expansion, H03 Sweet Ride Station takes place on this stage, where the player has to push the Tower from their side all the way to the enemy side against a team of sanitized Octolings. The player has five minutes to complete the objective. The layout for this mission is the release 2017 Tower Control layout.