Manta Maria is a multiplayer stage in Splatoon 2. It takes place on a large boat connected to a dock with bridges.

Manta Maria is a large ship with the spawn points located at the bow and stern of the ship. The areas closest to the spawn feature varying heights including steep drop-offs. Following the path to the right leads to an upper area that oversees the central band of the ship. Going straight from the spawn leads to a structure that can be climbed on to get a vantage on the central area and a hallway that leads to the lower portion of the central area. Distinguishing features of the stage include three large masts in each team's base and at the center of the stage which are accessible by netted walkways which overlook the stage. The key point of this stage is the offensive and defensive battle around the three huge masts and the area covered in netting. It is possible to get to the opponent's spawn area by swimming up a wall and jumping to the other side.

Manta Maria features two Splat Zones. The Splat Zones are located at parallel sides of the central area surrounding the mast. The layout has been unchanged from Turf War.

The Tower is located at the center of the stage and replaces the bottom half of the mast. The goal is located right at the drop off of the enemy spawn point. The Tower travels down the hallways leading into the enemy base, then lower down into their area and forwards until it is up against the opposing team's raised platform. Additional blocks have been added to make it easier to access the whole map and enter the opposing team's side.

The Rainmaker is located at the center of the stage and replaces the bottom half of the mast. The goal is located right at the drop off of the enemy spawn point. The layout of the stage is similar to Tower Control, but some of the blocks have been removed, and a new sponge has been added in the main path. Players can try to run into the enemy base through the main path accessible in Turf Wars or take an additional route to the left.

The baskets are located behind each team's structure past the narrow hall leading into their base. The only changes made to this mode is the inkable block that allows access to the right side of the enemy's spawn, which is present in Tower Control and Rainmaker. This layout of the stage provides three primary routes to reach the basket. The right path is the most direct, having players jump over an opening and going directly to the basket. The center path leads through the hallways leading into the enemy base. The left path allows players to sneak behind enemy lines and circle back to the basket. 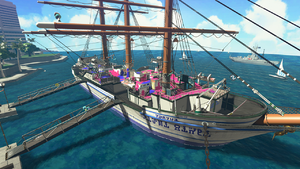