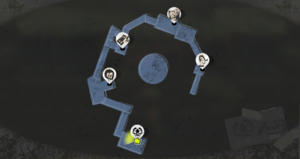 A map of the Crater in the single-player campaign, Return of the Mammalians.

The Crater is a location in the Splatlands and the tutorial world of Return of the Mammalians in Splatoon 3. It consists of 4 Kettles, Camp Cuttle, a Kettle to return to Splatsville and a large structure leading to Alterna. It additionally hosts a spot where the player can change the look of the New Squidbeak Splatoon's Captain. 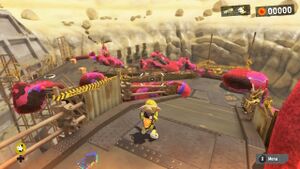 The Crater being infested with Fuzzy Ooze.

The Crater is a massive crater located in the Splatlands that has an upside-down structure similar to the Eiffel Tower. It also contains the first four levels of the single-player campaign, Return of the Mammalians. When the player finds themself in the Crater, they meet a retired Craig Cuttlefish. He believes that the sudden disappearance of the Great Zapfish is caused by the Octarians yet again. He recruits the player and calls them the new Agent 3. For the first four levels of the campaign, he will help them out like in Splatoon and the Octo Expansion. After a sudden fight with DJ Octavio, who seeks answers for the sudden disappearance of his troops, the ground falls and Smallfry, Cap'n Cuttlefish and Agent 3 fall into Alterna. Agent 3 and Cap'n Cuttlefish get separated afterwards. Agent 3 can return to The Crater by interacting with the Zapfish Doll behind the Squid Sisters. When they interact with the doll, they will be promoted to relive it.

Upon returning, they will have 1300 power eggs. They will have their Hero Suit and Hero Shot. However, they will not have the bombs from upgrading their Hero Suit, only Smallfry. All the kettles will be cleared, as well as all the Fuzzy Ooze except for the last one. Agent 3 can rematch DJ Octavio there by removing the last of the Fuzzy Ooze. To return to Alterna, the player can open the menu and select the “Return to Aterna” icon or defeat DJ Octavio again. When opening the menu in the Crater, they can only access the first tab and the last one.

No. 1 Octarians in the Crater? YIKES! 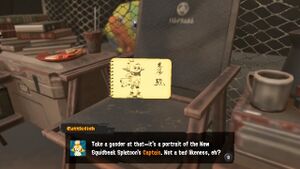 The player interacting with the drawing in Camp Cuttle.

If the player interacts with the portrait sitting on a chair in Camp Cuttle, Craig Cuttlefish will ask the player if they ever heard of the New Squidbeak Splatoon's Captain. After a short conversation, he will ask the player if the portrait looks good or not. This is the part where the player can decide the hairstyle, skin tone and eye color. To keep consistency, the options will be limited to those from the first game. If no Splatoon 2 save file was imported, the captain will always use the female hairstyle and green eyes by default. 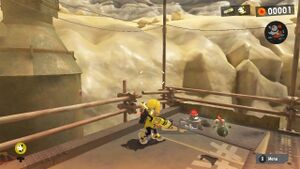 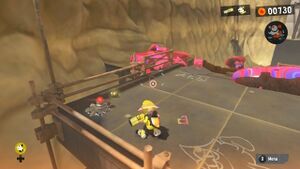 After choosing a hairstyle:

After choosing a skin tone:

After choosing an eye color: