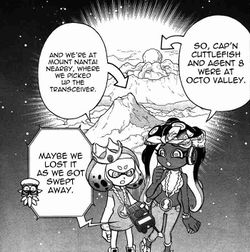 Mount Nantai is a location mentioned in Splatoon 2 and Splatoon 3.

In the Octo Expansion, when Cap'n Cuttlefish is first contacted by Off the Hook, they mention they are calling from Mount Nantai, which Cap'n Cuttlefish mentions is near Octo Valley. More specifically, there is a panel in Chapter 25 of the Splatoon manga showing the location of Mount Nantai in relation to Octo Valley, with the mountain being close to the octopus rock formation found in Octo Valley but separated by water. It is implied that Pearl goes to Mount Nantai to practice her shockwave-causing singing voice (seen in Sunken Scroll 1) away from civilization, implying the mountain to be mostly free of people.[1] In Marina's chat room, Mount Nantai is mentioned as the location where Pearl and Marina first met, with Pearl mistaking Marina as "some country bumpkin". Marina describes herself visiting Mount Nantai every day for a week in the hopes of meeting Pearl again, which led to the formation of Off the Hook. The mountain itself stands at around 2,657 feet tall, or approximately 810 meters.

In the manga, Mount Nantai is also home of Ammoses Shellendorf's treasure, where it is protected by three guardians: Fierce Fishskull, Jetflame Crest, and Justice. 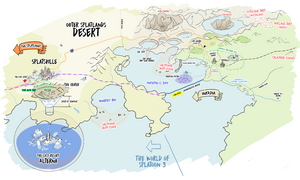