The Blue Team with their weapons out, ready for their counterattack.

This is a list of characters in the Splatoon manga.

Some of the characters' current English names are from fan translations. The official English translations from VIZ Media are used when available.

A group of low-level, supposedly idiotic Inklings who are the main protagonists of the manga. They use a blue ink color. This team consists of four members: A group of four S+ Inklings, being considered "god-like". They each lead a team of their own. A team of Orange Inklings wearing the same headgear, a Special Forces Beret. Defeated by the Blue Team in Issue 4 by Idiotic Syncnication Power. All members, except Aloha, wear the same clothing, the Logo Aloha Shirt.

The first team to beat Team Blue in a match, but were later defeated in a rematch.

They are a supporting team of Rank B Inklings.

New characters in the Splatoon 2 era

A major team of neon green Inklings who had plans to practice in the mountains after being inspired by Gloves' trip, but takes too long to get in the campgrounds.

A group of magenta Octolings who first debuted in the Octo Expansion portion of the manga. They recently developed an interest in music bands. Even though they do not use their real names, especially when Eight restored his memories, they prefer using the ones Goggles named them. 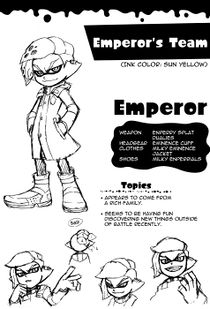 A group of sun yellow ink colored Inklings. All members wear the same gear except shoes, with Emperor and Prinz also wearing the shoes from this set. The gear is the following: the Eminence Cuff, Milky Eminence Jacket and Milky Enperrials. After appearing in the manga, this set was released in Splatoon 2 on 15 December 2017. They are considered the main antagonists of this era and are considered god-like (being able to get 99.9% in Turf War), even beating the entire S4 playing as one team. The parents of the members have known each other long ago and their team practice begins with all members naturally gathering around Emperor, without him having to say a word.

A group of light blue Rank X Inklings that first appeared as silhouettes in Chapter 29. They have a major role as the main antagonists in the Square King Ranked Cup arc.

A group of 2 yellow Inklings and an Octoling who are the antagonists of Sheldon's Adventure. They serve as the guardians of Sheldon's grandfather’s treasure and test Goggles and Sheldon via one-on-one turf wars. Also, a fourth one, Hivemind, announced the Final Fest Splatfest in the manga.

Shadows are copies of Inklings (and assumedly Octolings, though there are no confirmed Shadow Octolings) that are made of energy. They appear from the monitors of Deca Tower in Inkopolis Square, and describe themselves as "radio wave energy amplified by the passion of battles". Though they all are virtually identical from their original Inkling counterparts, there are numerous differences, including:

Apart from these differences, the Shadows and original Inkling counterparts are exactly the same, including skill-wise, with both having the same abilities.

A Team of Shadow Inklings that are copies of Team Blue. They initiate the "Shadow Arc" by kidnapping Lil Judd and threatening to take over Inkopolis Square. It seems like the Shadows like to chat with each other.

A team of Shadow Inkling that opposed their Originals in the second Turf War of the Shadow Arc (the Originals who fought in said match were decided via Jan-ken-pon, the Japanese equivalent of Rock-paper-scissors.)

There are numerous Shadow Inklings that we only see outside of battle. This section is made for those Inklings.

The team's Japanese name is Ikarus Team. Their ink color is orange. All of the team members were in favor of Hockey coming up with the name 4DS. They appear in the second issue of this manga.

(Stray Squids in Japanese) A supporting group of dark orange Inklings who hide their true faces and they have yet to show those faces to each other. All members wear the same clothing, the Crimson Parashooter. They appear in the fifth issue of this manga.

A supporting group of light blue Inklings who love to be clean, so they always have a nice soap odor around them.

A supporting group of pink ink colored, cross-dressing Inklings. All members wear the same gear, namely the Inkling Girl 2 set: the Squid Clip-Ons, School Cardigan and Fringed Loafers. They all have the first four female Inkling hairstyles. They went to buy clothes for women. They first appear in the third issue of this era, facing against the Yellow-Green Team. They are named after their hairstyles but it is revealed to be wigs and they all have the "Buzz-Cut" haircut, which is revealed when Goggles blew them away with his sign that was used to cheer on Rider who was battling against the team.

A supporting group of dark blue ink colored Inklings who tried to convince girls to join their practice, but only four boys show up. All members have the same "Buzz-Cut" hairstyle and wear the same clothing, being the Retro Gamer Jersey, as well as some sort of headband for headgear. They first appear in the third issue of this era, facing against Gloves' Team.

A supporting group of light purple Inklings who love costumes and appears in Chapter 30. They are always looking for a costume-loving fourth member. All members wear certain amiibo gear sets.

A supporting group of light orange Inklings who work hard and appears in Chapter 33. All members wear the Worker's Head Towel, Garden Gear and Angry Rain Boots. They are diligent with their laundry since they all sweat a lot. They are very particular about their fabric softener. 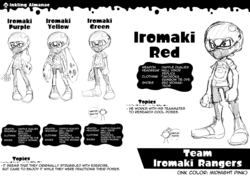 A supporting group of Inklings with a Midnight Pink ink color who strike cool and intensifying poses and appears in Chapter 36. They seem to struggle with exercise, but they enjoy practicing their poses. All members wear the Null Visor Replica and the Takoroka Rainbow Tie Dye, and they all use the Dapple Dualies.

A supporting group of Blue-Purple Inklings and an Octoling who are a group of researchers who mainly study plants. Every member wears the SRL Coat.