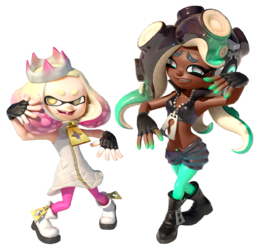 Off the Hook is a pop idol duo based in Inkopolis Square consisting of Pearl and Marina. They take over the Squid Sisters' duties from the first game as the hostesses of Inkopolis News at the start of the game, as well as Splatfest events. They return in Splatoon 3 with the side project Damp Socks feat. Off the Hook.

When the game starts up the first time after Version 3.1.0, Pearl starts an Inkopolis Fashion Focus about a trend of "squidkids with weird hairstyles", which are actually Octolings. As the broadcast ends, Pearl says that the fashion focus was the 'only best thing' so she will probably never do it again.

Off the Hook makes an appearance throughout the Octo Expansion, helping Agent 8 and Cap'n Cuttlefish by giving advice and commentary on Agent 8's tests. They meet the duo after Agent 8 passes Fake Plastic Station through Cap'n Cuttlefish's walkie-talkie, as they were on Mount Nantai where the signal was the strongest. Pearl and Marina call themselves by their usernames, MC.Princess and DJ_Hyperfresh, respectively. If Agent 8 loses all of their lives in a test at least twice, Marina will offer to use Agent 8's test data and hack the Kamabo Corporation's database to trick the test into thinking Agent 8 passed. If Agent 8 has less than 2000 CQ Points to do so, Pearl will take money from her father's wallet to be transferred into CQ Points, after which Cap'n Cuttlefish can be talked to, to pay the points back.

After Agent 8 collects all four thangs, Marina discovers they make a blender and the Telephone that had them find the thangs intends on blending Agent 8 and Cap'n Cuttlefish. Before it can do so, however, Marina activates Agent 8's CQ-80's distress signal, summoning Agent 3 and breaking the blender and phone in the nick of time. Marina then tells Agent 8 that they can escape through the hole Agent 3 made. As Agent 8 escapes the facility, Off the Hook shows up with a fleet of helicopters to pick them up along with Cap'n Cuttlefish and Agent 3.

As Pearl raps with Cap'n Cuttlefish, the platform Agent 8 was on rises up and turns out to be a huge statue of a human, with the Telephone, now known as Commander Tartar, intending on destroying all Inklings and Octolings with his blast of primordial ooze. Marina analyzes the statue and discovers that the statue is charging up by sunlight. Therefore, if they can cover it with ink, with the help of her Hyperbombs that Agent 8 has to manually detonate, then the statue will stop charging and Pearl can finish it off with a "Hypersonic Battlecry" to destroy it. After Agent 8 detonates all the Hyperbombs, the statue attempts to fire anyway, prompting Pearl to activate the Princess Cannon. As the statue fires, Pearl lets out a giant Booyah and battles with the statue's blast before pushing it back and destroying the statue with pink ink. As the statue collapses into the sea, Pearl and Marina celebrate and watch the credits with their allies. 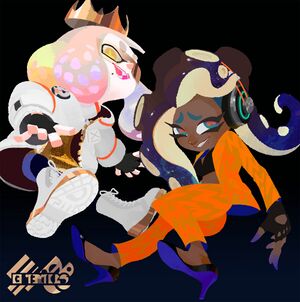 Art of Off the Hook in Splatoon 3

Off the Hook returns in Splatoon 3 with the band Damp Socks feat. Off the Hook. They perform the songs Candy-Coated Rocks and Tentacle to the Metal.

The duo are set to appear in major paid DLC for Splatoon 3, arriving with a future update.[2]

Off the hook is an expression that can be used to express that either something is cool or that someone is out of trouble. Hook can also refer to either the tool used for catching fish or an element of a song that makes it catchy to the listener.

Don't get cooked... Stay off the hook!