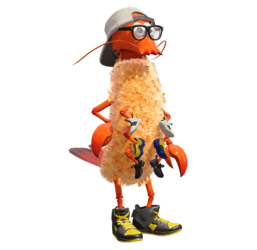 Crusty Sean is a character in the Splatoon series. He is a Japanese tiger prawn who runs the shoe shop Shrimp Kicks in Splatoon, runs the food truck Crust Bucket in Splatoon 2, and travels the world in the Wandercrust while being supported via SplatNet 3 in Splatoon 3.

Crusty Sean is a humanoid shrimp wearing a dark purple beanie and a fuzzy yellow-orange jacket, giving him a resemblance to tempura. He has two arms that end in pincers and four pairs of legs, each with a different pair of shoes. From highest to lowest, these are: pink and red Arrows, Blue Sea Slugs, Pink Trainers, and purple and white Hi-Horses.

Crusty Sean's appearance remains largely the same in Splatoon 2. However, instead of a beanie, he wears a white baseball cap turned backwards, with Enperry's name in Inkling visible from the back. He also wears black-rimmed glasses and a black hoop earring on his right side, despite not having visible ears. From highest to lowest, his shoes are: White Norimaki 750s, Yellow-Mesh Sneakers with blue instead of magenta, Arrow Pull-Ons, and Sun & Shade Squidkid IV with some color alterations.

In Splatoon 3 Crusty Sean is wearing his Stay Crusty Cap, tempura-like shorts and new shoes. He no longer wears his earrings.

Crusty Sean is known to be carelessly friendly. He is obsessed with wearing many of his favorite shoes all at the same time thanks to having many legs.[1] While his "fried" body gives him the look of a tempura, it is actually a designer jacket.[2] He is a friend of Bisk thanks to their shared love of shoes[3], and according to Marie, is a little impulsive.[4] He likes making food, quitting Shrimp Kicks for running a food truck and often refers to food in his Wandercrust comments.

Crusty Sean's version of DJ Lee Fish's song Lookin' Fresh emphasizes the bass and percussion, because his gear corresponds to the lower part of the body. Furthermore, the heavy beat gives it a bouncy sound, reflecting his outgoing personality.

When a player below Level 4 enters the shop:

When a player at Level 4 or higher enters the store for the first time:

(Welcome to Shrimp Kicks! Oh! You're pretty fresh, huh? Well, my shoes'll be givin' you even more oomph than you already got! They've all got abilities to put you at the top of your game during battle. Just press

When the player selects a piece of clothing:

When the player purchases a piece of clothing:

After the player chooses whether to equip a new piece of clothing:

(Yo thanks! If you wanna change up your gear, press that sweet little "customize" on

When the player does not have enough Cash:

(You don't got enough money!)

When talking to Crusty Sean for the first time:

(Everything all right, gup? Welcome to the Crust Bucket! Enjoy a snack or drink here to earn extra experience and money during battles! All I want from you for that is tickets. So, what will it be?)

When talking to Crusty Sean:

(Everything all right, gup?)

While selecting food and drink:

After ordering or leaving:

When the player has no tickets:

(Without a ticket, no service! Sorry, but I don't make the rules. Well, actually I do, but I really need to see a ticket first.)

Crusty Sean comes from crusty, referring to its crusty coating, and Sean, a male given name, making a play on the word "crustacean."