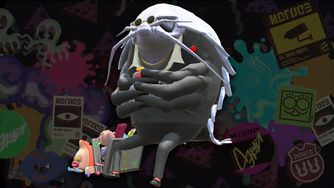 "Iso Padre" is the name given to a character in the Octo Expansion.

According to Iso Padre himself, he originally had a different name but cannot remember it after spending so long on the Deepsea Metro.

Iso Padre is a pale blue giant isopod wearing gold-rim sunglasses, a golden neck chain, and a black leisure suit under his carapace. While he has a relativley naturalistic appearance like many of the other denizens of the deep, he has fewer pair of legs compared to a real isopod, with three pairs near his chest and one near the bottom of his body, which isn't a part of his carapace, giving him an anthropomorphic appearance. He has some Sanrio-esque stickers on his carapace and is seen besides a briefcase filled with toys.

Iso Padre is described as a gentleman and when talked to, he gives philosophic and poetic lines. He likes mem cakes, but because he washed out early when he tried the tests at the Deep Sea Metro, he instead wants to see the ones received by Agent 8. His briefcase with toys contains "hopes and dreams". He seems to have good relations with Craig Cuttlefish, often talking with him while on the train and one of Craig's raps calling Padre "[his] boy".

Iso Padre is seen in the Deepsea Metro trying to get to Inkopolis.[1] He also has a close relation to mem cakes. When he arrives onto the train, he notices Agent 8 has some mem cakes and asks them to gather more. When Agent 8 completes a full set of mem cakes (including grayscale mem cakes obtained by completing a station with Marina's help), they receive a piece of gear that is unlocked when the player completes the Octo Expansion.

Iso Padre gives a piece of gear for every mem cake set completed. These gear items are listed below.

Iso Padre makes a brief cameo appearance in Volume 7. He plays no major role in the story of the manga itself, but he is seen greeting Goggles and Eight while on the train.