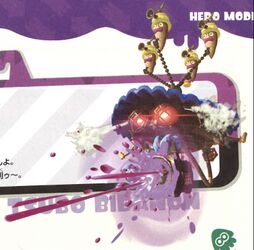 This article is about the character. For the mission by the same name, see The Octo Shower.

The Octo Shower is the penultimate Octoboss encountered in Splatoon 2's Octo Canyon by Agent 4. It also appears in the Octo Expansion as the Octo Shower Supreme.

The Octo Shower is one of the Octobosses created by the Octarians and used in the events of Splatoon 2. It is the boss of Slimeskin Garrison. It also appears as a boss in the Octo Expansion, located at J01 H07 Cool Your Jets Station. In The Art of Splatoon 2,, it is confirmed that the rubber duck shown in the first cutscene, Quackers, is the Octo Shower's love interest.

The Octo Shower appears to resemble a brass shower head, wearing a shower cap while hanging from three to four chains held by Octocopters. Its eyes appear to be made of vents while also glowing red.

The Octo Shower in Phase 1

When Agent 4 arrives at its mission, it rises out of a large puddle of ink before attacking. It starts by firing two Octorpedoes at the player, and also uses a charger as another attack. It is also able to rush towards Agent 4 with a shower of ink, in a similar manner to a Flooder. If Agent 4 manages to splat all three of the Octocopters, then the Octo Shower falls and a tentacle appears. In the second phase, the Octo Shower is aided by four Octocopters and can now use a hand-cranked splatling. In the last phase, it is able to use the Sting Ray while being aided by four Rocket Octocopters. After the final tentacle has been splatted, the Octo Shower goes into a panic and calls for more Octocopters (which do not come) before it explodes.