Marie is a part of the Squid Sisters pop idol duo and a host of Inkopolis News, alongside her cousin Callie. Her signature color is lime green.

She is voiced by Mari Kikuma. 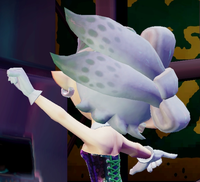 The coloration on the ends of Marie's tentacles.

Marie is a very fashionable Inkling and has a more laid-back design in comparison to her cousin. Her tentacles, which are light gray, are tied in a large bow on the right side of her head, with the ends wrapped around to the other side and curling up slightly at the ends, along with a bang swept to the left of her face. Marie also has a faint green tinge at the ends of her tentacles. She has large, downturned eyes with gold irises and light-brown pupils in the shape of a cross or a 'ninja star'. Her eye markings end in small, slightly curved points, and her eyebrows are large and oval-shaped. Her ears are slightly narrower, longer, and downturned than those of the average Inkling, and on them, she wears a pair of chunky, milky white earrings. Her outfit, which appears to be a corset dress with green lacing in the back, is black with a reflective texture as if covered in sequins. On the front are three bright green marks, which, somewhat morbidly, are made to look like the cuts made in squid when it is cooked, and the underside of the skirt portion is also bright green. With this outfit, she wears lime green tights, black shorts, white gloves, and a small, white, pointed neck accessory giving the impression of a shirt collar. On her feet, Marie wears a pair of black wedge shoes with a texture like leather, which have a shiny green material on the bottom and two green buttons on either side of the ankle. She wears a green and white hat resembling a calamari ring and has a birthmark or a beauty mark on her right cheek. It was revealed in Splatoon 2 that she has scars from when Callie hit her with a bug net.

During a Splatfest, any part of Marie's appearance that is normally lime green changed to match the color of her Splatfest team, including the ends of her tentacles.

As a child, Marie wore traditional Japanese-style clothing and her tentacles were much shorter and messier. Her first outfit, shown in Sunken Scroll 17, consisted of a black yukata with a white polka dot pattern at the bottom and a pair of thick black zōri with pink thongs. On the left side of her head, she wore a green and white accessory that simply looked like a smaller version of her current calamari hat. For her second outfit, which was shown in promo art for the Grasshopper vs. Ant Splatfest, Marie wore a white yukata with a seashell pattern in lime green, navy blue, and dull purple. The calamari accessory had taken on a dark purple tint in addition to its existing colors.

While posing as Agent 2, Marie wears what seems to be a green shirt, a green hat with a logo similar to the Firefin one, and a white facemask. Her attire suggests she is trying to hide her identity from fans that happen to see her.

In Splatoon 2, Marie once again dons traditional Japanese-style clothing that resembles the outfit she wore as a child. Her outfit consists of a black and dark grey kimono with gold triangle patterns around the waist and carries a green parasol with the

Cuttlegear brand logo on it. She wears traditional Japanese sandals, or 'geta', and a different, pink, headpiece. This kimono bears the Kensaki (

Toni Kensa) family emblem, although the connection is unknown.

Marie is seemingly quieter and not as excitable as her cousin, and usually only gives a half-smile, if at all. She can be sarcastic from time to time, and slightly prone to complaining, but is usually in a mild mood. Overall, her disposition is laid-back and friendly, but sometimes grumpy. She is also an expert at doing impressions, as mentioned by Agent 1.

She dislikes overly-thrilling activities and can even be somewhat lazy. She also does not seem to be a big fan of tomatoes.

She has shown a demonstrably cheekier side, as seen in the Pokémon Red vs. Pokémon Blue Splatfest ending dialogue, where Callie asked how to change the name of Marie's Vulpix she traded her from "BLUEISBEST" and Marie hurriedly ends the broadcast, slyly avoiding the question. In addition to this, when reattempting the final boss fight of Splatoon 2, at one point her dialogue reads: "Octavio, stop hitting yourself! Stop hitting yourself!", laughing at the fact that DJ Octavio's "fists" need to be shot back at him. She states that she 'can't throw shade without Callie' in Octo Canyon, further implying her cheeky side.

When anticipating an announcement (for example, the theme of a Splatfest, or the contents of an update), she often repeats herself in excitement. (Ex. "What is it? What is it?!")

She mentions several times on Inkopolis News that her preferred weapon class is the charger. Given the existence of the

Hero Charger and her role as Agent 2, it is possible that Marie used a charger in Octo Valley. In Splatoon 2, she mentions that she is "more of a charger girl", and in the final battle, Tide Goes Out, she is shown using the Hero Charger.

Despite her constant teasing Callie, it is said that, in the Squid Sisters Stories, that Marie's worry for Callie overshadowed everything. This further implies their relationship. 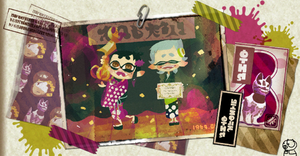 Marie was raised in Calamari County. At a young age, she became interested in singing and entered Inkopolis' first annual Youth Folk-Singing Contest with her cousin, Callie. Their stunning performance earned them a standing ovation from the audience, as well as a first-place trophy and certificate.

After moving to Inkopolis, Marie worked at Walleye Warehouse with Callie. She resented this job, saying that the best thing about it "was quitting" and burning her uniform. Eventually, Marie joined Callie in creating the Squid Sisters, slowly rising in notoriety to become Inkopolis' premier pop icons. 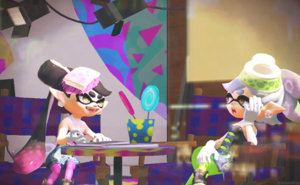 Callie and Marie in the Inkopolis News studio.

By the events of Splatoon, the Squid Sisters had become household names in Inkopolis Plaza, with one of their celebrity jobs being hosting Inkopolis News. Marie usually interjected sarcastic statements regarding stage news, often groaning at Callie's puns, but was known to also make silly, nonsensical, or even off-topic comments herself. She also helped to announce updates and Splatfest news and could be seen chatting with Callie in the Inkopolis News Studio. Whenever a Splatfest occurred, Marie and Callie could be seen singing and dancing to City of Color atop trucks in the Plaza equipped with platforms and stage equipment. While Callie won 25 Splatfests across all regions, Marie only won 18.

Marie also made a major appearance during Octo Valley. After initially making a news broadcast about the disappearance of the Great Zapfish, she appeared as Agent 2 of the New Squidbeak Splatoon, led by her grandfather, Cap'n Cuttlefish, with Callie as Agent 1. Throughout Octo Valley, Marie was heard communicating to Cuttlefish, Callie, and Agent 3 regarding the looming Octarian menace. Once Cuttlefish was kidnapped after Agent 3 defeated the Octomaw, the two agents acted as Agent 3's mentors in his place, albeit in disguise, not revealing their true identities.

The group eventually reunited during Enter the Octobot King!. As the final phase of the battle with DJ Octavio began, Marie and Callie performed the Calamari Inkantation, revealing their true identities as the Squid Sisters, freeing Cuttlefish, and spurring Agent 3 to defeat Octavio. The two revealed the Great Zapfish's return on Inkopolis News, not disclosing their part in its rescue, and performed Maritime Memory over the credits.

As detailed in the Squid Sisters Stories, by nine months after the Callie vs. Marie Splatfest, the Squid Sisters rocketed to even greater fame as the biggest stars in Inkling society. However, after they released their first solo recordings, they began following separate paths. Marie began putting on solo concerts, appearing on music shows, and even starting a career in theater. Their schedules allowed for little quality time spent together, but when they were together their relationship seemed to be intact. Unfortunately, shortly after planning a trip home to Calamari County together, Callie disappeared. Fearful for what may have happened to her, Marie soon found that DJ Octavio had escaped his prison and the Great Zapfish had disappeared again. With Cap'n Cuttlefish not around, Marie moved to Inkopolis Square, taking a break from her career and going into hiding.

Marie introducing herself to Agent 4.

In Splatoon 2, Marie recruited Agent 4 in Octo Canyon to help rescue Callie and the Great Zapfish, taking Cap'n Cuttlefish's role as their main advisor and guide. After beating the Octo Shower, she and Agent 4 received a call telling them to leave Octo Canyon and never look back. However, Marie quickly realized that the caller was Callie since she held the phone upside-down. During Tide Goes Out, they learnt that Callie had been brainwashed by DJ Octavio using his hypnoshades and were forced to fight him and Callie. Marie was able to shoot off the hypnoshades with a Hero Charger filled with "low-tide ink", slowly bringing Callie back to her senses and reuniting the Squid Sisters. After Octavio was defeated for the second time, the Squid Sisters made a new single, Fresh Start, which is played over the credits.

Marie stayed at Cuttlefish Cabin to look after Octavio while waiting for Cuttlefish to return, where she was later joined by Callie. They provided various stats and information about the player during their conversations with Agent 4.

Marie did not make a physical appearance during the Octo Expansion, but after all the stations in the Deepsea Metro were cleared, she stumbled upon Marina's chat room under the username of "Agent 2". Accidentally discovering Cap'n Cuttlefish chatting there, she initially worried about it being a dating site, but quickly dispelled these fears when she found out that Cuttlefish and Agent 3 were fine. She attempted to convince Cuttlefish to return home for seaweed stew before signing off and later shared this information with Callie in Tentakeel Outpost.

She, along with Callie, first appeared in Issue 1 of the CoroCoro manga Splatoon, where she announced the CoroCoro Cup. She and Callie are hosts and commentators for that tournament. She now often appears in issues starting with Issue 2.

In the Hero Mode issue, she takes the role of Agent 2, together with Callie, who is Agent 1. They appear in the fight against DJ Octavio and battle alongside both Agent 3s, with Marie using the Hero Charger.

For images of Marie and Callie together, see Squid Sisters/Gallery.