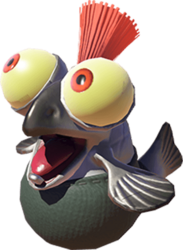 This article is about the character from Splatoon 3's story mode. For the type of Salmonid this character belongs to, see Smallfry (species).

Smallfry, also sometimes referred to as little buddy or li'l buddy, is a Smallfry that accompanies the player in Splatoon 3. It assists the player in the single-player campaign Return of the Mammalians, being able to be thrown at enemies to cause damage, distract enemies, and activate various Mechanics, such as Inkrails, Propellers, and Ink Switches. It is unaffected by Fuzzy Ooze and can eat it to clean it up if fed with enough Power Eggs.

As a Smallfry, it is the smallest type of Salmonid. It is distinguished from the enemy Smallfry by its completely gray skin, customizable hairstyle, lack of a spoon, and dark green pants.

Smallfry can be thrown like a Sub weapon in certain stages. If it directly hits an enemy or destructible object, it will deal consecutive damage to it over time. Otherwise, it will distract nearby enemies so they will attack Smallfry instead of the player; this allows for opportunities to attack troublesome enemies such as Shielded Octotroopers. If Smallfry takes too much damage, it will be splatted and the player must wait until it respawns to use it again.

Smallfry can be recalled using the "This Way!" command or by trying to use it as a Sub weapon when it is not already on the player's back. It will also automatically return to the player after a short time, upon falling off the stage, or if the player moves too far away from it.

Smallfry's attributes can be upgraded as part of the Hero Suit, allowing it to deal more damage and take more damage before being splatted as well as reducing the amount of ink needed to throw it.

A large red exclamation point may sometimes appear over Smallfry's head when it is near a loot anchor (including those that are invisible). If this happens, it will run toward the loot anchor and begin to glow with a yellow light while bouncing next to it, alerting the player to its presence.

Smallfry can consume Fuzzballs, destroying Fuzzy Ooze connected to them. Each Fuzzball requires a specific number of Power Eggs to eliminate, which can be seen by pressing down on the right stick while in Alterna. For the Fuzzballs found aboard the Spirit Lifter, Golden Eggs are required instead.

During the last phase of the final boss, Smallfry transforms into "Hugefry", a gigantic chum salmon.