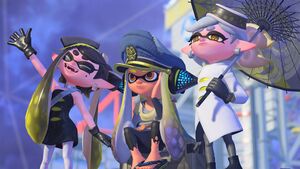 The New Squidbeak Splatoon as of Splatoon 3.

The New Squidbeak Splatoon is a secret platoon of soldiers created to battle the Octarians and the successor to the Squidbeak Splatoon. It was formed by Cap'n Cuttlefish after the Great Zapfish was stolen by the Octarians. He recruited his granddaughter, Callie, who in turn recruited her cousin Marie, into the platoon to search for the missing Zapfish. Cap'n Cuttlefish later persuaded Agent 3 to join as well.

The New Squidbeak Splatoon successfully defeated the Great Octoweapons and DJ Octavio on two different occasions, recruiting Agent 4 and several affiliates on the second occasion. Together, they recaptured the stolen Zapfish and restored power to Inkopolis. After recruiting a new Agent 3 to investigate the Great Zapfish's third disappearance, they joined forces with DJ Octavio and Deep Cut, stopping Mr. Grizz's plan to create a new era of mammalian dominance at the expense of the Inklings and Octarians.

These characters have all worked for or with the New Squidbeak Splatoon, but are either not full members, or their full membership status is currently unknown.