This article is about the character. For the mobile phones used in Splatoon 3, see Sea-Cucumber Phone. 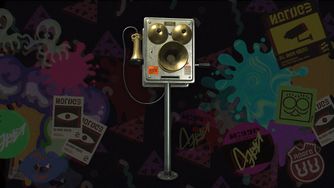 Commander Tartar, known as the telephone before the final boss fight, is the main antagonist in the Octo Expansion. It is an AI created by The Professor that typically appears as an old telephone.

In its telephone form, it appears as a wall telephone attached to a thin pole. It has two bells and a loudspeaker resembling a carbon microphone on the front, giving the impression of a face. On the right side of the speaker is a card input slot, and under the speaker is a rectangular opening it uses to dispense the CQ card and the CQ-80. At the bottom to the right on its "face" is an orange Kamabo Co. sticker and on the left is a sticker with writing on it. At the top of the "face", over the bells, is a black sign with a golden outline with golden text on it. An ear piece is hung on the right side of the phone and on the left is a handle that appears to be rotatable.

Once Agent 8 has collected all four of the thangs, it connects its telephone body to them, transforming itself into a blender. During the final boss battle, it appears as its first form with sanitized ink on it in a ice cream swirl, as well as a LED light and a capacitor poking out on the front, some cables on the side and an Octarian tentacle at the top. Its bells and speaker appear to float on this liquid.

Being an AI, Tartar does not have any major personality traits, though appears to have a hate for what it would deem the less important things in life, such as fashion and sports, and lets Agent 8 know as much before the final boss fight, saying it was "disgusted" by Inkling and Octoling culture. It seems to have been programmed to only recognize things that people need, and the Inklings' love for fashion seems unreasonable to it. As a result of this and over ten millennia of total isolation driving it insane,[1] it ends up with a crazed, passionate hatred of life on the planet, seemingly being its only driving force. However, before revealing its true intentions, the telephone initially appears friendly and helpful towards Agent 8, proving its capabilities of manipulation and deception to achieve its goal.

In Japanese, Tartar's dialogue uses katakana and hiragana characters in a bizarre manner that is often used to denote robotic or artificial speech. To reflect this trait, the English and Latin American Spanish localizations instead gives Tartar a "contemporary speech" mode in which it excessively uses American English and Mexican slang, respectively, but also has error messages inside brackets appear in its speech, possibly because it cannot find the correct slang, given that one of the error messages it prints reads [SLANG_NOT_FOUND]. It disables this mode before the final boss fight.

Commander Tartar is an AI created by a human scientist referred to only as "the professor" 12,000 years before the events of Splatoon 2. Its purpose was to pass down all of humanity's knowledge to the next capable species. The professor's intention to do so was to prevent the next intelligent species from repeating the same mistakes that lead humanity to extinction. However, due to spending all those millennia isolated and alone, the AI's thought process ended up going in a different direction.[2]

Commander Tartar initially saw hope in the Inklings and Octarians, but eventually became repulsed by their evolution, needless wars, and fashion obsession, ultimately concluding that they were unfit for its knowledge and reprogramming itself to create a new form of life that would be worthy of its patronage, while annihilating the existing lifeforms on Earth. The Sanitized Octarians are its creations, spawned from the biomass it has collected from the remains of its previous test subjects and refined into "the perfect life".

The telephone initially appears as an ancient-looking public telephone in the Deepsea Metro. When first talked to, it provides Agent 8 with two items:

The telephone then tells Agent 8 about the promised land that awaits them outside of the Deepsea Metro, and informs them that they must collect 4 thangs to return. Upon gathering all 4 thangs, however, they form a massive blender. The telephone then tries to grind up Agent 8 and Cap'n Cuttlefish into raw materials, only to be stopped by Agent 3, with the telephone seemingly broken.

During a lengthy escape, the telephone attacks Cap'n Cuttlefish and Agent 3, eventually hijacking the latter's mind into tying up the Cap'n and attacking Agent 8. Their hijacked mind is broken when Agent 3 is defeated by Agent 8.

Following the defeat and Agent 8's escape above the surface, a gigantic human-shaped stone statue emerges. In the hollowed-out eye of the statue, the Telephone appears and introduces itself as Commander Tartar and declares its intent to eradicate and recreate all life on Earth. The Commander activates a weapon from the statue's mouth: a massive cannon that threatens to destroy the entire world if fully charged.

Agent 8 manages to put a stop to it by inking the entire surface (with the assistance of Marina's hyperbombs), blocking off the statue's source of power: sunlight. Despite this, the cannon is still able to fire but is stopped by Pearl's

Princess Cannon, with Tartar destroyed along with the statue.

The telephone plays the same role as it does in the game, telling Goggles, Eight, and Cap'n Cuttlefish about the promised land and how they must collect the four Thangs to get there.

Once Team Blue reunites, and the Thangs are collected, the telephone then attempts to blend the group, but is ultimately stopped by Rider.

Shortly after Eight and Team Blue continue on to search for Eight's friend (Seven), the telephone wakes up and hijacks Rider's mind, influencing him into kidnapping Cuttlefish, and later, most of Team Blue. It then watches a mind-controlled Rider fight Goggles and Eight while mocking the group. However, the fight ultimately ends when Goggles and Eight free Rider.

After the group finally escapes Deepsea Metro, the telephone reveals its true identity as Commander Tartar, and reveals his plans to destroy Inkopolis. Marina deploys her Hyperbombs, and the group works together to detonate them. After Goggles and Eight detonate the last Hyperbomb, Tartar decides to fire its ray anyways, but is foiled one more time, this time to Pearl's Princess Cannon, resulting in Tartar's defeat.

Commander Tartar comes from tartar sauce, a sauce made using mainly mayonnaise, which may reference the ooze seeping out of it. Tartar sauce is primarily used for seafood, referencing its displeasure for Inklings. It could also be a reference to Tartarus, a deep abyss far in the underworld in Greek mythology. It would reference how the facility is deep underwater. This may also tie into the possibility that the NILS Statue is meant to resemble the Greek god Hermes.