The four thangs are collectibles in the Octo Expansion, claimed by the Telephone to be necessary for Agent 8 and Cap'n Cuttlefish's escape from the Deepsea Metro, and into the "promised land". 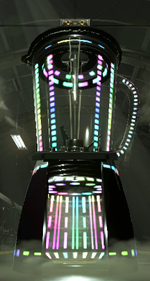 The blender that is constructed when all thangs have been assembled.

The four thangs resemble pieces of a giant blender, which the Telephone promises will produce a doorway to the "promised land". In reality, it intends to use the blender to blend Agent 8 and Cap'n Cuttlefish into a "primordial ooze", which it plans on using to wipe out all life on Earth and replace it with a new species of its own liking. The thangs are as follows:

Whenever the player unlocks a line containing a thang, the station that contains it is marked on the Deepsea Metro map. Each of the thangs' stations are empty railway terminals with the same layout and do not cost anything to enter. #19 bless plays in these stations, unless the thang is already collected, in which case no music is played. Agent 8 can only choose the Splattershot, with no objectives other than popping the protective bubble around the thang and collecting it. The protective bubble is similar to the Rainmaker's shield, albeit much more durable, requiring almost the entire ink tank's capacity to break. These stations are all named after synonyms of 'break' and 'leave' and their subtitles are all "Here lies the [name] thang..." After breaking the shield, Agent 8 takes a selfie with the thang using the CQ-80 before taking it back to the train on a trolley. The loading screen that appears afterwards shows the thang being carried back to Central Station as well as the normal imagery. The Telephone then congratulates the player on finding the thang.