The ink tank is an object that Inklings and Octolings use to store ink. It appears in all battle modes. 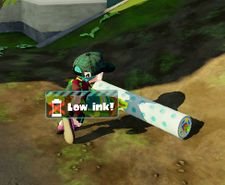 A roller runs out of ink.

The ink tank is a cylindrical container made primarily of clear plastic, while its top and bottom are covered in green caps. Player characters typically wear an ink tank on their back during battle as a way to store ink. As players use a weapon, the contents visibly decrease. When an ink tank is out of ink, weapons can no longer be used in their regular state, and a notification appears, stating "low ink!", and a small red X appears on the tank. Ink tanks can be refilled slowly by ceasing to use a weapon, or quickly by being submerged in a puddle of similarly-colored ink. While submerged, an ink tank icon appears, displaying the current capacity of the ink tank that disappears once full. Using a special weapon immediately refills the ink tank.

The ink tank on the back of the player indicates the amount of ink in real-time and flashes red when a player is out of ink. Upon using a weapon, the ink tank temporarily stops recharging ink, showing a white space where the ink was used until the player finishes. An LED on top of the ink tank lights up with a red tint when there is enough ink to deploy the sub weapon and a small red arrow indicates how much ink is necessary to use it. While recharging ink, a slight sound effect occurs when enough ink has been restored to use the sub weapon.

In Octo Valley, Agent 3 is given a unique ink tank from Cap'n Cuttlefish, along with the Hero Suit and the Hero Shot. It can be upgraded by bringing up the Power Up menu by pressing

Using the Inkling Squid amiibo gives the chance for the player to unlock limited-ink challenges for Gusher Gauntlet, Floating Sponge Garden, Inkvisible Avenues and Spongy Observatory in which the player has to complete the levels without running out of ink. Agent 3 is given extra ink tanks in addition to the regular ink tank, represented by a large indicator that appears on the left side of the screen, showing how much ink is left. Whenever Agent 3 refills ink for their regular ink tank (submerged or not), it consumes ink from the extra ink tanks. If the extra tanks are used up, Agent 3 can no longer refill ink for the regular ink tank, even when submerged. Using up all ink causes the mission to fail. The player is given one extra ink tank in Gusher Gauntlet, one and a half in Floating Sponge Garden and two in Inkvisible Avenues and Spongy Observatory.

In Splatoon 2, the ink tank functions identically to how it did it Splatoon, although it now has a more stylized design compared to the first game. The indicator to show how much ink is needed to use a sub weapon now appears in the icon while submerged in ink. In Version 3.2.0, a new version of the ink tank was introduced. It has 10% more ink capacity than the normal version, and is visually wider and has a rounded cap. It is exclusive to the Splattershot Jr. and its variants.

In Salmon Run, players have a lifesaver which also functions as an ink tank, having the contents of the wheel filled with ink where the ink depletes clockwise from the wheel.

In Octo Canyon, Agent 4 is also given a unique ink tank from Marie, along with the Hero Suit and Hero Shot. It, too, can be upgraded, but now it must be upgraded at the Ammo Knights Enhancifier.

In the Octo Expansion, Agent 8 wakes up with a uniquely designed ink tank on their back, resembling more of a backpack than a bottle. It has a hook which is used to hold a liquid bag that fills up and explodes, splatting Agent 8 whenever they fail a test. Agent 8 still wears the ink tank even during unarmed missions. The Octo Expansion introduces the Ink Refill item, which instantly refills the tank to full when picked up, while also featuring the return of limited-ink challenges, comprising of C02 Shrinky Ink Station, D05 All That 8-Ball Station, I02 Dinky Ink Station, and J06D11 Ink & Watch Station. Unlike the Inkling Squid amiibo challenges version in Splatoon, the player receives no additional ink tanks, but they can collect Ink Refill items, which is the only way to refill ink in these challenges where the ability to passively regenerate ink (submerged or not) is disabled altogether; submerging in ink displays a no symbol to signify this. Using up all ink leaves a couple of seconds to collect an Ink Refill, signified by electronic alarm sounds and the liquid bag pulsating. Failure to do so causes the mission to fail.

The ink tanks in Splatoon 3 have new designs compared to the previous games.

In multiplayer modes, the ink tank now resembles a drinking pouch or hydration pack. It has an internal dip tube that connects the cap of the ink tank to its bottom. The red arrow, which indicates how much ink is needed to deploy the sub weapon, is replaced by a thick, red, horizontal line.

In the Return of the Mammalians mode, the new Agent 3 has a backpack to carry Smallfry with an ink tank attached to it. There are two designs for the backpack and ink tank.

Abilities on a player's gear can affect usage of the ink tank: