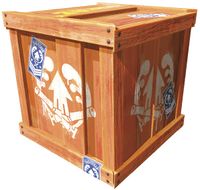 Crates are boxes which appear in the Splatoon series' single-player modes. Crates may contain items such as Power Eggs, Sunken Scrolls, armor, cans, or nothing at all. Crates are also found in Battle Dojo battles, where they contain canned specials.

Crates are common features found both in single-player modes and the Battle Dojo.

They appear in four varieties:

Plain crates are made of light brown wooden planks, while decorated crates are made of darker orange planks and covered in insignias and stickers. In Octo Valley and Octo Canyon the decorated crates have the Cuttlegear logo on them, while in the Octo Expansion they are adorned with the Kamabo Co. logo. Crates often appear solo, in groups, or stacked, and may even support Octarians perched on top.

In the Octo Expansion, a new type of crate is added. This crate is called the Target Crate and functions similar to the new Target Balloons. The Target Crates are neon green with a multicolored target printed on each side. Whereas regular crates are made of wood, the Target Crates appear to be some sort of plastic or fabric material stretched across a metal cuboid frame.

Crates can be destroyed easily by being splattered with ink. When broken, decorated crates may reveal collectibles such as Power Eggs and Sunken Scrolls, while plain crates contain nothing. Target Crates usually contain nothing and have to be broken to open doors, reveal secrets, or pass tests.

Armored crates can also be found, and are different than normal crates because they take more ink to destroy. The crates seem to be armored with tape attached to them.

As they most likely appear with Sardinium or Sunken Scrolls, armored crates can also appear as a regular crate with nothing inside when broken, such as the path towards the kettle for Sunset Octocopter being blocked by an armored crate.