Mission 13 is located on an elevated area in Area 3 on the left side of the area. Go left when first approaching the area, passing the brick walls. There is a ramp to access and get up to it. Mission 13 should be behind you when above the ramp.

Another way of reaching Mission 13 is to head to the two ramps on the right side of the area. Make it to the platform and there should be a small wall in front of you. Going past the small wall, go around the center of the tower, and behind it is the kettle to Mission 13. 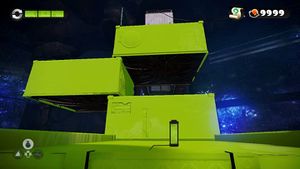 Walk off the spawn point and down the ramp. There will be a grate, so turn into a squid to pass through it. There will next be a large moving platform. Walk onto it. Ink the platform, swim to the other side of it, and jump off it onto another platform. Destroy the crates and splat the two Octotroopers. Then walk up the ramp and press

to Super Jump at the launchpad.

Jump off the platform with the checkpoint. There will be several platforms to pass through. Cross them, like at the beginning. Splat the Octotroopers and Octocopters before they can splat you. On the last one, turn right, ink the small wall and jump off the platform onto it and climb up it.

In this Checkpoint, you will come across some Octocopters which are the only enemies in this area. Splat them and head upwards on moving platforms. The last one travels under a grate, so turn into a squid to pass through. The launchpad is on the last platform which is not in motion. Towards the end of the walkway. There you will see three boxes, one of which contains the Sunken Scroll.

Go through the first platform and splat the Octocopter and Octotrooper. Destroy the crates, including the one with armor. Go through another platform before heading to the three moving horizontal platforms. Ink the platforms, then swim up and collect the Zapfish. 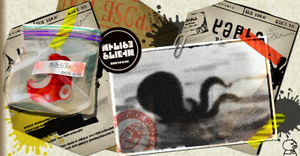 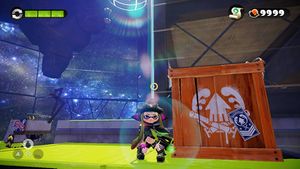 Location: At the second checkpoint, beside the large wall. When landing on the checkpoint, you will face a large wall with moving platforms and two Octocopters overhead. Rather than engaging them, go on the path to the right. Around the corner of the wall will be three large crates. Destroy them and collect the scroll. 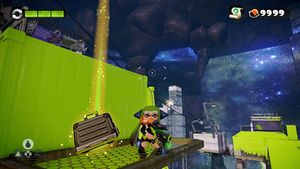 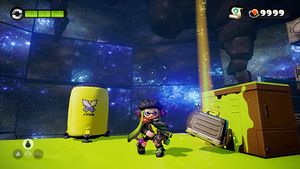