The Rampaging Octowhirl!
Roll with the Punches...​

The Rampaging Octowhirl!
Roll with the Punches... This article is about the mission. For the character of the same name, see Octowhirl.

To unlock The Rampaging Octowhirl!, the player must complete all six missions of Area 3. The Boss Kettle is located in the center tower, but the player must ink up the walls on the side, swim up to the grated platforms, and climb carefully to the top to reach it. Be warned that there are walls to climb up from grates, and turning to a squid too early could lead the player to drop back down to the ground.

The Octowhirl appears to be a giant metal spinning-top clam with spikes, purple eyes, and a protruding red tentacle. Its lower half glows in a spotted pattern when enraged. The eyes are shielded by a transparent shell and blink similarly to a malfunctioning lightbulb. Purple ink pours from the center of the Octowhirl as it spins. The underside of the Octowhirl is adorned with a large spike which it balances upon and can be retracted within the shell. 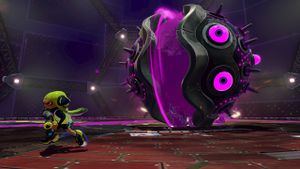 The Octowhirl spins around to the edge of the arena like a spinning top. Once it sees Agent 3, it immediately tilts onto its side and rolls towards the player at high speed, attempting to squash them. The player must create a large pool of ink so that the Octowhirl, when it charges, sinks into it, exposing the tentacle inside it. When sufficiently coated, the Octowhirl should suddenly drop downwards, and the tentacle pops up in the center, but if the player misses, they can be steamrolled as the boss restarts its attack cycle.

In the second phase, the Octowhirl activates the arena floor, making the two outer sections rotate in opposing directions. The floor can either be inked entirely or the player can lure the boss into their path after shooting ink further to the side to match the rotation of the tiles.

In the final phase, the Octowhirl removes a large amount of the floor tiles, exposing a few uninkable glass surfaces, significantly reducing the available space for ink. The player should follow the path of the central platform and walk backwards, inking up to the edge as the Octowhirl will likely only sink in a pool of ink that is larger than it. After destroying the tentacle for the third time, the Octowhirl explodes, revealing a blueprint and the Zapfish.