Pinwheel Power Plant is the 24th mission in Splatoon's single-player mode, Octo Valley. It is named as such because of its heavy use of Pinwheels.

Take the small ramp on the left and furthest from the entrance of Area 5. There is another ramp, but do not take it. Perform a swimming squid jump to the other side and use the Inkrail. This Inkrail will take you to Mission 24.

Two Pinwheels can be found at the start of this mission. If you stay on the second Pinwheel, there is a secret area holding four large crates. One crate carries a lot of Power Eggs and a Launchpad that leads you to another Launchpad, going to Checkpoint 1.

Small narrow lines of platforms are swarmed with Octotroopers, two of which are shielded. The best way to get around these is to distract them with a Splat Bomb - they will pay attention to your Splat Bomb, letting you shoot the Octotroopers. The first small crate holds armor and the next small crate holds an Inkzooka, now making the next section of Checkpoint 1 easier. Once past the area, an Inkrail will take you to the next Checkpoint.

Going under the Pinwheel to start off, there is a wall to get back to the original platforms, but the Pinwheel above can block your way sometimes. Another Pinwheel can be found as well but can distract you when trying to get off a small wall to find a Launchpad.

Some crates create a blockade from continuing the mission but it can be broken. The crate in front on the right holds armor. After breaking the crates, an Octobomber can be found hiding. Checkpoint 3 is very similar to Checkpoint 1.

You will fall down onto an upcoming platform. A Pinwheel is present at the bottom as well, so do not let it push you off. There is now a Splatform which is required to get up on to reach another launchpad. If you fail the climb, you can climb on the wall or use the Geyser to get back up.

Another Splatform is here, but instead of rotating, it moves back and forth. If the jump is performed a little late, you will miss the platform, so be very careful on this Checkpoint. An Octotrooper can be found riding the first and last Pinwheels. Now there is a Splatform that needs to be taken to reach the Zapfish, but there are two Octotroopers on it. If you fail to reach the Splatform, you can swim back up or use a geyser found on the bottom platform. Once you have reached the top of the tower, the Zapfish will be there. 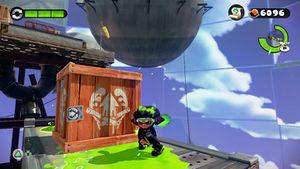 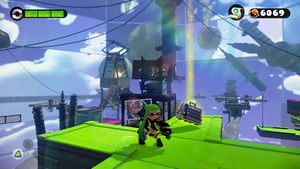 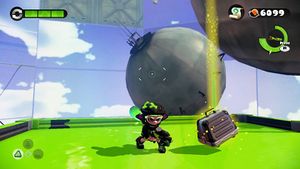 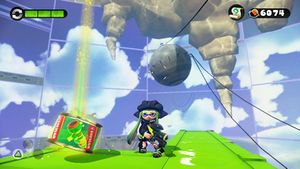 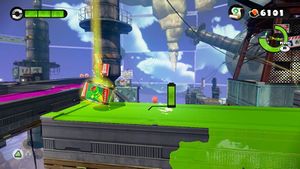 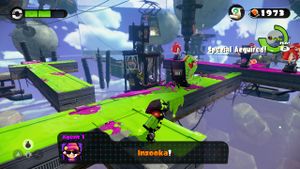