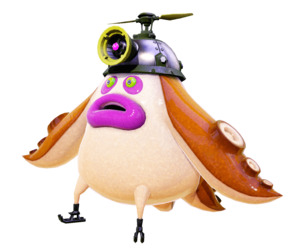 Octobombers are Octarian enemies in Octo Valley, Octo Canyon, the Octo Expansion, and Return of the Mammalians. They attack by launching Splat Bombs from their mouths.

Octobombers are large, flying Octarians that wear a helmet similar to those of a Octocopter but with a different nozzle that the Splat bomb comes out of. They are colored dull orange with two large tentacles that somewhat look like wings and three shorter ones on the back. Octostrikers are very similar to this Octarian, only bigger with a darker color and a different helmet that comes with a visor. In Splatoon 2, Deluxe Octobombers are introduced; these have a maroon color and a pair of thrusters that allow them to dodge from left to right quickly.

Their sole attack is an Octarian version of the Splat Bomb, launched in a small arc with a few seconds in between each bomb. Their mobility and aim are poor, but they tend to aim in the player's general direction.

They appear to be wearing little skis instead of shoes and they hover around one Inkling's height off the ground.